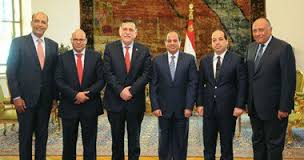 Head of Libya’s Government of National Accord (GNA) urged the international community to lift the arm ban saying that fight against IS will be meaningless with the embargo still reinforced.

Head of GNA Faiez Serraj who was attending an Arab League meeting Monday in Cairo blasted the UN-imposed restriction, saying that “it doesn’t make sense that the international community supports our war against terrorism, and forbids us from arming ourselves.”

Libya is struggling to weed out IS militants who have imposed their own rule since entering the country in 2014.

Serraj’s who entered Tripoli in March with his team, is also struggling to assert his power in competition with two other rival administrations, respectively based in the far East headed Prime Minister al-Thinni and in Tripoli led by Khalifa Ghwell.

The international community has stood by the side of GNA tasked to reunite the country and address the numerous challenges that have gripped the country since the death of Col. Gaddafi in 2011.