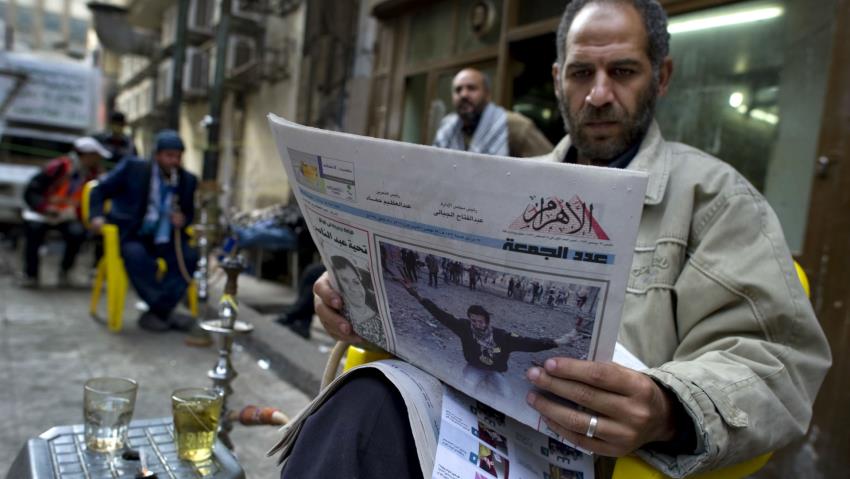 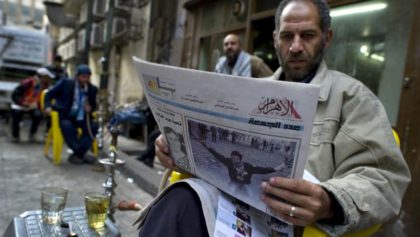 Egypt’s main state-owned newspaper Tuesday lambasted the interior ministry in an “unprecedented editorial” following the arrest of two journalists and police raid on the Press Syndicate headquarters on Sunday.

Al-Ahram, one of government vibrant supporters, took millions of Egyptians by surprise as it chided state security apparatus over brutality committed on journalists over the past months. It condemned police forces Sunday raid on the Press Syndicate headquarters, which resulted in the arrest of Amr Badr and Mahmud el-Sakka, both working for e-journal Babawet Yanayer, opposed to al-Sisi.

“The whole of the Interior Ministry’s apparatus has made a mistake with the raid of the press syndicate… Journalists are not terrorists, who can be raided by a group of police officers,” the editorial read.

The unsigned editorial also called for the sacking of interior minister Magdy Abdel Ghaffar and said that all actions to muzzle and silence journalists will not ease the situation but will rather worsen it as they had seen it in 2011, in reference to the revolution which brought down the country’s former autocratic ruler Hosni Mubarak.

“One move is expected: the dismissal of the Minister of Interior in response to this loathsome act, which has sickened the whole of Egypt at a time when many families are grieving the absence of their youths, held behind bars without charges,” it further read.

“We have learned from experience, which the security services, unfortunately, have yet to grasp, that the people are ones who choose their destiny with their will – not leaders.”

“If the people rise up in rebellion for their freedom, they will not be stopped by anyone not even the highest ramparts and the police with their weapons,” it added.

Around the same time, Press Syndicate in commemoration of World Press Freedom Day on May 3rd claimed that the government is at war with journalists whom it likens to terrorists.

“This year we mark World Press Freedom Day with Egypt down in all the international rankings,” syndicate chief Yahiya Kallash told a press conference.

“Instead of seeing the government take concrete measures to overcome this situation, we are surprised to see it escalating the war against journalism and journalists,” he added.

The Syndicate is holding a General Assembly meeting this Wednesday to decide on steps to take in face of government attacks on journalists.

Furthermore, the Committee to Protect Journalists (CPJ) has sounded the alarm adding that Egypt is sinking in the global rating of countries hostile to journalists. The CPJ reports that Egypt has become the second largest jail for journalists.