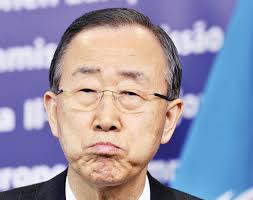 Rabat has flatly rejected the regrets expressed earlier this week by the UN Secretary General Ban Ki-moon about what he called “a misunderstanding” about his use of the word occupation when referring to Morocco’s presence in the Sahara, and denounced the unethical behavior of the Un Secretariat General.

The UN Chief’s inadmissible statements and behavior cannot be justified, erased or reduced to a mere “misunderstanding” for they “jeopardize seriously the fundamental principles of the facilitation mandate assigned to him by the Security Council and run contrary to the requirement of neutrality and impartiality the UN Secretary General should comply with,” the Foreign ministry spokesperson said.

For Morocco, Ban’s acts are premeditated and seek to alter the nature of the dispute and prejudge its outcome, the spokesperson said, adding that this translates “a total alignment with the arguments of the other parties” to the Sahara conflict.
He reiterated Morocco’s willingness to engage in a responsible, comprehensive and constructive dialogue about the crisis triggered by the UNSG, as called for by the Security Council.

On Thursday in New York, Morocco’s permanent representative to the UN, Omar Hilale denounced what he called “a hostile campaign” of the UN Secretariat General against Morocco, and expressed Morocco’s dismay at the leaking of a letter addressed by the UN Chief to King Mohammed VI.

The Moroccan diplomat who was talking to the media said 24 hours after Morocco received the letter, it was leaked to some other stakeholders. “This is contrary to the UN ethics and contrary to diplomatic practices,” Hilale said.

The diplomat also enumerated the blunders of Ban Ki-moon during his tour in the region early March saying that besides his use of the word “occupation,” he bent before the flag of an entity that is not recognized by the UN, did not respect the rules to go to Bir Lahlou, made the victory sign in Tindouf which is contrary to his supposed neutrality, and talked of a self-determination referendum while the Security Council and the General Assembly have discarded this option since respectively 2004 and 2007.