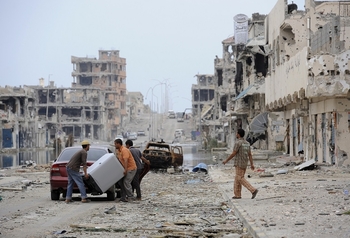 Amnesty International Tuesday launched a call to world powers that backed the overthrow of former Libyan ruler Gaddafi to help Libyans end the cycle of violence, abuses and detrimental humanitarian catastrophe that have gripped the one-time prosperous North African country.

The call comes on the fifth anniversary of the Libyan revolution that toppled the country’s long-time ruler with the support of the NATO forces.

The human rights NGO urged NATO powers and world leaders to do more in bringing to book those who committed grave crimes including war crimes and serious human rights abuses.

“World leaders, particularly those who took part in the NATO intervention that helped to overthrow Colonel Muammar al-Gaddafi in 2011 have a duty to ensure that those responsible for the horrors that have unfolded in Libya in its wake are held to account,” said Said Boumedouha, Amnesty’s deputy Middle East and North Africa director.

The London-based NGO has clustered rival administrations and other groups vying for power together as it accused them of untold kidnappings, torturing acts, extra judicial killings as well as indiscriminate attacks on residential areas.

The NGO also urged the International Criminal Court (ICC) to look into the war crimes and launch lawsuits against the perpetrators adding that effectiveness of the unity government will take years allowing therefore the authors to roam about untouched.

Amnesty International also tried to draw world eyes on the ongoing humanitarian crisis taking place in Libya, with an estimate of 2.5 million Libyans affected while 1.3 million people are in desperate need of medical care, food, education and protection.

Celebration of the fifth anniversary of the revolution displayed mild enchantment across the country. Around 2,000 people turned up in Tripoli, in Martyrs Square to mark the anniversary with fireworks. Tripoli authorities reportedly sponsored the show with around $14 million and prizes including cars were given anyone who shows up for the celebration. The internationally rejected administration also reportedly declared 17 and 18 February public holidays.

Celebrations were held in other cities including Ghadames, Ghariyan and Tajoura. However in the East the celebration of the anniversary did not have the same momentum. Reports say in Benghazi almost no one marked the date.