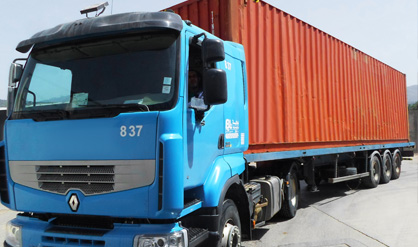 Tunisian custom files identification brigade Tuesday seized a container full of weapons and ammunition heading towards the governorate of Nabeul.

The container was loaded with a sizeable quantity of weapons and ammunition and belonged to a Belgian businessman.

The businessman and another Belgian national have been arrested and are being investigated.

The Belgian businessman was on the verge of getting a residence permit in Tunisia in order to launch a fancy-jewelry-production factory, press reports said wondering who are the suppliers, addressees, sponsors and financiers of the shipment.

Security authorities are also puzzled how could the shipment leave the Tunisian port of Rades unnoticeably despite the presence of customs officials and controllers. So many questions remain unanswered.

The latest seizure is the biggest so far in the history of Tunisia; a country where corruption is a common practice.

A report by the World Bank suggested that corruption and bribes have not disappeared in Tunisia after the revolution. The report adds that malpractices even got worse in the post-revolution era.

Opposition Lawmakers last month bashed Prime Minister Habid Essid for lack of vision to improve the country’s struggling economy and lack of good will to combat corruption which has become rampant in a country deemed a leading democracy in the Arab World.

Tunisia is also facing a surge in terrorist acts and 2015 was the worst year in the history of the country.