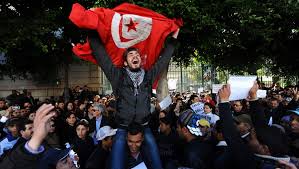 January 14 is a day of remembrance for Tunisia, which is celebrating this year the fifth anniversary of Zine El Abidine Ben Ali’s departure from the country and the zenith of its revolution.

Despite the ongoing security threats in the country, thousands of Tunisians on Thursday flocked en masse to Tunis’ city centre, parading about Habib Bourguiba Avenue, chanting revolutionary slogans like “Work! Freedom! Dignity!” and waving Tunisian flags, a display that very appropriately recalled the revolution itself.

Tunis was the epicentre of the Arab Spring of 2011, a move to establish democracy that spread throughout North Africa and the Middle East. The revolution inspired similar uprisings in Egypt, Syria, Libya, Yemen and other Arab countries but only Tunisia is considered a success story of the Arab Spring.

After the revolution, the North African nation established a new constitution and held free elections. But despite praise of the democratic transition, Tunisian youths who started the revolution still feel excluded from the nation’s prosperity.

For many Tunisians, this year anniversary raised mixed feelings, as the revolution pride is tempered by concerns over continued economic problems and a rise in jihadist violence.

Young people living in deprived suburbs of Tunis face poverty and marginalisation, and many join terror groups like the Islamic State.

According to the UN, almost 5,500 Tunisians are fighting alongside jihadists abroad, making of their number one of the highest among foreign fighters traveling to join conflicts abroad such as in Syria and Iraq.