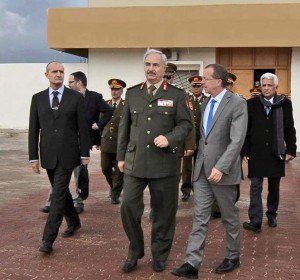 Head of UNSMIL Martin Kobler and Libyan National Army self-style Chief of Staff Khalifa Hafter Wednesday in a meeting agreed that it was time to erase terrorist organizations creating havoc in Libya adding that only a united Libyan army could achieve the daunting task, reports say.
Even though much of the meeting has not been revealed, the German diplomat and Head of the UN mission in Libya told reporters that Hafter agreed with him that Libya must stamp out terrorist and criminal organizations killing Libyan sons and daughters.
“And every day we wait, that you wait,” he said before adding “is a gain for Daesh [IS] in this country. And I am very glad to see that the general agrees on the urgency of the matter”
Questioned on when the UN Security Council will lift the arm embargo so much wanted by the Libyan internationally recognized government to fight the Islamic State, Kobler said all depended on the signing of the Government of National Accord (GNA) on Thursday in Morocco. He added that once the GNA is endorsed, the UN will immediately put in place a mechanism with respect to the lifting of the embargo.
Also on Wednesday, Kobler via UNSMIL website indicated that the GNA signing ceremony will take place on Thursday in the Moroccan resort town of Skhirat instead of Wednesday as targeted.
He also indicated that he took note of Malta meeting between House of Representatives (HoR) Agila Saleh Essa Gwaider and President of the General National Congress Mr. Nouri Abu sahmain who held one-on-one meeting to discuss the Libyan way to settle the political crisis and promised the UN assistance to help Libyans address their own problems.
Reports say Kobler has invited large number of actors in the dialogue including party leaders, mayors, HoR and GNC members in favor of the Dialogue Agreement and GNA after it appeared that Saleh Gwaider and Abu Sahmain ordered their members no to participate in the ceremony.
On Sunday, at Rome conference, the international community led by the UN Security Council stood firmly behind the future GNA to be headed by GNC member Faiez Serraj as the only legitimate Libyan authority to address the crisis and deal with pressing issues namely insecurity, humanitarian disaster that has gripped more than 2 million Libyans internally displaced.
However Saleh Gwaider and Abu Sahmain in the meeting at in Malta demanded that Morocco ceremony be delayed on the grounds that Libyans did not discuss the composition of the future GNA. They also announced the creation of joint working groups to finish the dialogue so that it would be accomplished before the end of this month.