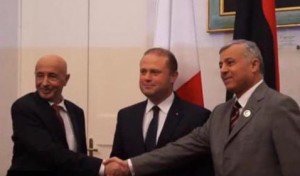 The hoped-for meeting between heads of rival House of Representatives (HoR) and the National Congress (GNC) took place Wednesday in the Maltese capital with a joint statement calling for a delay in the signing if the Dialogue Accord and endorsement of the Government of National Accord.
Head of Tobruk-based HoR, Ageela Saleh Gwaider eventually turned up at last week announced meeting with rival Nuri Abu Sahmain under the auspices of the Maltese government.
The Two leaders known as core resistants to the Libyan National Dialogue Agreement were received by the Maltese Prime Minister Joseph Muscat.
Reports say Saleh and Sahmain had closed talks in a one-on-one meeting in a room with either side sitting at a wide table following a public hand-shake.
The meeting was followed by a joint statement calling the UN to delay agreement signing to take place in Morocco.
According to media, Saleh indicated that no decision should be made on the composition of the unity government until there was a “Libya consensus over the candidates”. He reportedly added that no one either from the HoR or the GNC has been authorized to sign the Agreement in Morocco.
Reports say the two presidents are supportive of Libyan-Libyan settlement of the crisis and have given their blessing to the Tunis Declaration of Principle deal made 10 days ago between GNC team and a team from the HoR. The deal judged unacceptable by majority of HoR members stipulates that a joint HoR-GNC committee of 5+5 would be formed and tasked with appointing a Prime Minister and two Deputies while another joint committee will be also fielded to discuss Libya’s 1963 constitution deemed as the appropriate political roadmap to end rivalries and restore the stability of the country.
Said so, the meeting joint statement stands in the way of the conclusions of the consultations reached in Tunis last week during a meeting between Martin Kobler, GNC team and the HoR. Libyan protagonists present in Tunis during the meeting agreed to head on with the signing of the agreement on December 16.
Also on Sunday the international community meeting in the Italian capital urged rivals factions to lay down their arms and quickly ink the agreement and endorse the UN-proposed unity government.
17 countries led by the UN Security Council underscored the urgency to have unity government which will address the enormous and difficult challenges that have gripped the North African oil-rich country since the fall and death of Col. Gaddafi in 2011.
The signing of the Agreement to take place in the Moroccan city of Skirhat, on Wednesday has been postponed to Thursday due logistic problem according to Moroccan and UN diplomatic sources.