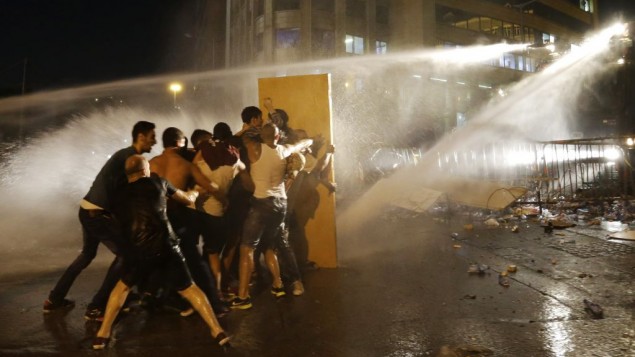 Lebanon: Anti-government demonstration called off, PM threatens to step down 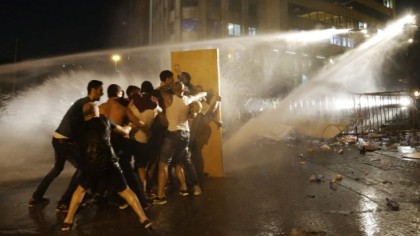 The Lebanese capital city Beirut was rocked over the week-end by fierce battles between protesters led by an online movement calling itself “You Stink” and police forces.

The protests for the resignation of the cabinet which were planned to go on Monday have been called off after one protester was reported dead following Sunday clashes which left at least 44 demonstrators and 30 police officers injured.

“You Stink” movement and other civil society movements said they will hold a press conference later on Monday to explain their decision.

The protest found foothold in the garbage crisis plaguing Beirut for many weeks. The streets of the capital are full of piles of garbage after the capital’s main landfill was closed a month ago.

What looked at the beginning as a peaceful demonstration turned out violent after police tried to disperse the demonstrators with clubs and water cannons as some angry protestors were attempting to break through barbed wire in Riad Solh Square leading to the government’s headquarters.

Late Sunday evening, the protestors broke through the first barbed wire after intense clashes with security forces. When the protesters got closer to the government headquarters, police fired tear gas, forcing many of the 20,000 participants to flee.

Protestors are now demanding the resignation of the cabinet, blaming officials and politicians of corruption.

Meanwhile Lebanese Prime Minister Tammam Salam threatened Sunday to resign. “I warn that we are going are going towards collapse if matters continue,” Salam said in a televised address.

“Frankly, I have not and will not be a partner in this collapse. Let all officials and political forces bear their responsibilities,” Salam continued adding that those who used excessive force against protestors will be held accountable.

Salam also indicated that it Thursday’s cabinet meeting fails to deliver on the current crisis, “then there is no need for the council of ministers.”

Lebanon is ruled by a sectarian power-sharing agreement but has been without a president for more than one year now. The country is under the influence of two regional powers, Saudi Arabia and Iran, who are pulling the strings in the weak cabinet.

Parliament has extended its own term twice and has not convened because lawmakers differ on whether they can continue working before voting for a president.

Reports say a resignation of the Prime Minister Salam will lead the country into further political crisis.