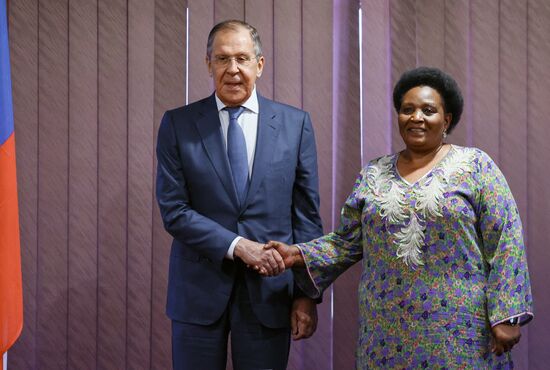 Russia’s top diplomat Sergei Lavrov slammed Tuesday France for interference in the internal affairs of African countries and support to terrorist organizations on the continent.

Lavrov was speaking at a joint press conference with his Eswatini peer Thuli Dladla in capital Mbabane, as part of an African tour.

“By supporting terrorists in Libya, France has fostered terrorism in Africa,” he indicated.

“This is a matter of foreign policy, we do not intervene in the internal affairs of other countries. Macron’s statements show that France does,” he added.

“We are accused of undermining French interests in the Central African Republic, Mali and now Burkina Faso. This is the mentality that the European Union (EU) applies everywhere in the world. This mentality was also used for Ukraine in the 2000s,” Lavrov said.

France, he also claimed, played an important role in the attack on Libya and led to the collapse of the Libyan state.

“By supporting the terrorists in Libya, France has fostered the terrorism that is still observed in Africa. It is sad that the colonial mentality and the ‘divide and conquer’ strategy are still used in the foreign policy of our European and Western colleagues,” Lavrov added.

Before traveling to the small Southern African country, the Russia foreign minister was in South Africa.