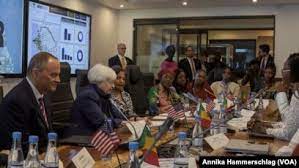 The United States continues the African charm offensive with US Treasury Secretary Janet Yellen having visited Senegal and Zambia as part of a 10-day trip aimed at rebuilding economic relationships between the US and its partners in Africa.

In Senegal, Yellen went to Gorree Island off the west African country’s coast on Saturday and spoke of the “unspeakable cruelty” of the trans-Atlantic slave trade. “Ultimately, Goree Island reminds us that the histories of Africa and America are intimately connected,” she said after touring the island. “We know that the tragedy did not stop with the generation of humans taken from here.”

Yellen began her tour Friday (20 January) with a visit to a US-funded business incubator for youth and women in the Senegalese capital, Dakar. As the first female US treasury secretary, she got a warm round of applause from the businesswomen at the meeting. Yellen also helped kick off a new rural electrification project in the west African country that will bring reliable power to 350,000 people. The project support some 500 jobs in 14 US states.

On the second leg of her African tour, Yellen is visiting Zambia with the aim to promote US investment and ties while she’s in a capital city that is visibly dominated by Chinese money. A ride from the Chinese-funded international airport into the capital city Lusaka passes billboards and newly built firms bearing Chinese signage, highlighting Beijing’s influence and increasing competition with the US. But the growth that the landlocked country has experienced has come with a heavier debt burden. In late 2020, Zambia opted to bow out of a $42.5 million Eurobond repayment, becoming the first African nation to default on its debt in the Covid-19 era. With the negotiations over how to deal with the debt load still ongoing, this is also a hot topic of conversation when Yellen meets with Zambia’s president and finance minister to push for the Chinese to continue negotiations.