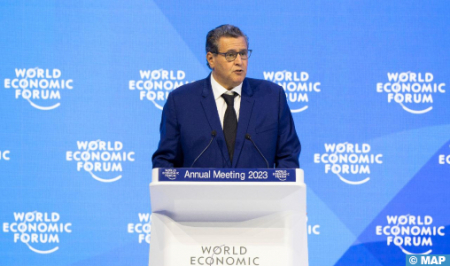 Morocco is entering, thanks to the leadership of King Mohammed VI, a new phase of its development characterized by the building of a Social State, the Head of Government, Aziz Akhannouch, said on Wednesday in Davos.

In one year, the government has fulfilled the royal agenda by putting in place the regulatory framework for compulsory health insurance and opening the rights for the two-thirds of the population who did not benefit from it until then, said the head of government, who was speaking at the Davos World Economic Forum.

This year, the government wants to go further and also generalize family allowances, thanks to a system of effective targeting of social assistance, he underlined.

During a session moderated by the founding president of the Davos Forum, Klaus Schwab, Akhannouch noted that at the same time the government has faced with determination the multiple crises of the year 2022: energy with the record surge in world prices, climate with the worst drought in 40 years, and inflation.

The accompanying measures included budgetary support and maintenance of macroeconomic balances and priority reforms, he explained, adding that the government has guaranteed supply, contained inflation and continued to reduce the deficits inherited from 2020.

In 2023, the government chief said, one-third of the state budget was allocated to health and education, including $7 billion for schools, with the aim of rebuilding confidence in public schools and strengthening essential skills for all schoolchildren.

Akhannouch highlighted the need to “give the future to the present” by allowing Moroccan youth to multiply opportunities to integrate the formal job market and to unleash their creative energy, noting that the Kingdom aims to create a stronger link between the economy and the social, while consolidating the ecological transition.

The large Moroccan delegation taking part in the World Economic Forum, held from 16 to 20 January in Davos, includes several cabinet members and other officials.