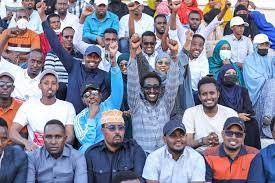 Somalia: President urges citizens to flush out ‘bedbugs’ at rally against al-Shabab

Somalia’s President Hassan Sheikh Mohamud urged citizens to help flush out members of the al-Shabaab jihadist group he describes as “bedbugs,” as hundreds of people in the country’s capital Mogadishu attended a government-organized rally to protest against the group’s bloody insurgency.

Sheikh Mohamud declared “all-out” war against Islamist fighters shortly after he came to office in May last year. Addressing large crowds at the rally held Thursday, the president warned “the people of Mogadishu, the kharijites (renegades) are amongst you… so flush them out. They are in your houses, they are your neighbors, in cars that pass you by.”

Al-Shabaab has been waging a bloody insurgency against Somalia’s frail internationally backed government for 15 years, carrying out attacks also in neighboring countries which sent troops to help in the fight against the militants.
“I want us to commit today to flushing them out, they are like bedbugs under our clothes,” Mohamud said, as demonstrators waved flags and placards with anti-Al-Shabaab messages. “The people are tired of massacres, killings, and all kinds of misdeeds and they are now saying to al-Shabaab: ‘Enough is enough’,” he added.

In recent months, the army and local clan militias have retaken swathes of territory in the center of the country in an operation backed by US air strikes and an African Union force. But the Islamist fighters have frequently retaliated with bloody attacks, showing their ability to strike at the heart of Somali towns and military installations despite the offensive.

North Africa Post's news desk is composed of journalists and editors, who are constantly working to provide new and accurate stories to NAP readers.
NEWER POSTCHAN: U23 Soccer Team at Airport Awaiting Official Authorization to Take Off to Constantine
OLDER POSTWB: Morocco’s growth to pick up to 3.5% in 2023 & 3.7% in 2024