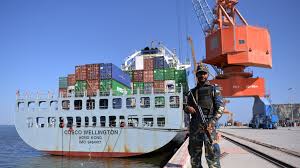 While some of the ports, bridges and other coastal projects constructed as part of Beijing’s so-called Maritime Silk Road help developing economies increase their capacity for trade, there are environmental downsides to China’s coastal infrastructure, according to a new academic study that has just been published in the journal One Earth.

The study, by researchers from Boston University Global Development Policy Center, University of California Santa Barbara, Colorado State University and the University of Queensland, looked at the risks from 114 Chinese-funded coastal development projects totaling some $65 billion over a 10-year period until 2019. The series of coastal projects dubbed by Beijing the “21st Century Maritime Silk Road” — part of President Xi Jinping’s greater Belt and Road Initiative to build infrastructure — “has enormous potential to propel economic prosperity … but there are growing concerns regarding the potential deleterious impacts of this initiative on the environment and local and indigenous communities,” the study said.

Africa has been found to be among the most negatively affected regions but Caribbean Island nations are also facing high risk to marine habitats. For example, in “Angola and Mozambique, more than 2,000 [km2] of marine habitats face high impact risks,” the research found. While infrastructure such as bridges and power plants can also threaten the environment, it is port developments that represent the greatest risks to marine systems, researchers found.

Also, other African ports, such as those in Mauritania, Côte d’Ivoire, Cameroon, Angola, Mozambique and Djibouti, are prominent regional risk hotspots. The study found that as well as affecting marine life and biodiversity, such projects can negatively impact indigenous coastal communities.