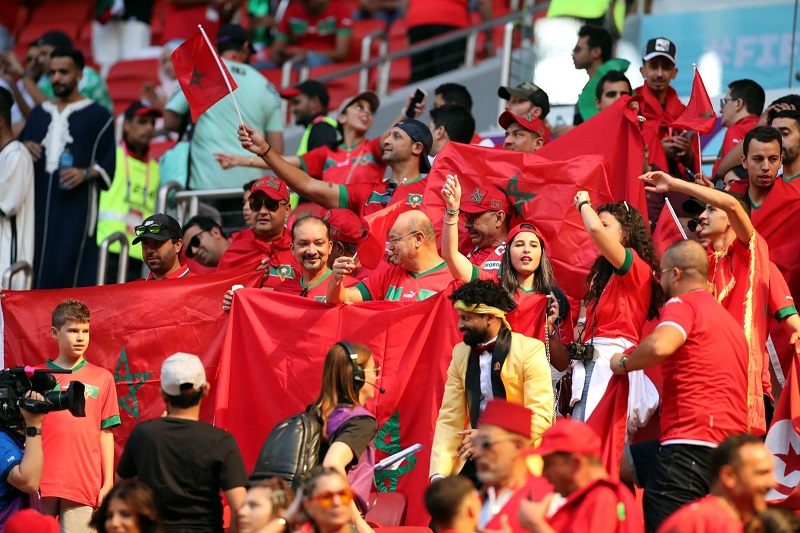 Morocco made it to the knockout stage of the World Cup in Qatar where Moroccan fans kept flying to support the Atlas Lions in their victorious journey.

Morocco together with Senegal are the only African countries left in the round of 16. They will face the powerful teams of Spain and England respectively in a tournament that carried surprises with well-ranking teams such as Belgium leaving the Cup while other African teams such as Tunisia and Cameroun beating France and Brazil respectively. Other Arab teams, Saudi Arabia and Qatar, have also left the tournament.

Morocco’s national football team has managed to unite Arabs better than any Arab league summit as social media is awash with videos from different Arab countries including war-torn Syria and besieged Gaza showing football lovers in cafes gathering to cheer for Morocco.

In Doha, the stadium in all Morocco’s games was filled with Moroccan fans. In the last game against Canada, demand for tickets by Moroccans exceeded the offer with many left waiting outside the stadium while thousands chanted and cheered non-stop in Doha fan zones and streets.

Arabs have now Morocco to support as it continues its fighting spirit led by national coach Walid Regragui, on whom Moroccans pin hopes to outperform the best performance they had so far in a World Cup 36 years ago in Mexico.

Now a decisive game awaits Morocco to get past the round of 16 on Tuesday against Spain which Morocco had held to a draw in 2018 due to the unfair use of the VAR in a game that Morocco was poised to win.

North Africa Post's news desk is composed of journalists and editors, who are constantly working to provide new and accurate stories to NAP readers.
NEWER POSTRemittances from Moroccans abroad to hit record level in 2022
OLDER POSTOCP new green investment program for 2023-2027 presented at a ceremony chaired by King Mohammed VI