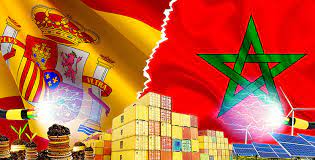 President of the Federation of Moroccan Chambers of Commerce, Industry and Services (FCMCIS), Lhoucine Alioua, and Spain’s Ambassador to Morocco, Ricardo Díez-Hochleitner Rodríguez, discussed means to strengthen trade and economic exchanges between the two countries.

During these talks, held in Rabat, the two sides welcomed the development of bilateral cooperation relations, including in matters of trade, and discussed ways to promote partnership between economic operators of both countries.

Talks also focused on the challenges faced by investors and ways to strengthen trade between companies established in Morocco and Spain, said Alioua.

The two parties took this opportunity to express their determination to further strengthen their relations in the economic, trade and investment, he added.

In addition, the FCMCIS president noted that the new investment charter, discussed at this meeting, will give a new impetus to investment in the regions that need it most.

For his part, the Spanish ambassador highlighted the importance of trade relations between the two neighboring countries, recalling that Spain is the final destination of nearly 40% of Moroccan exports to the European Union.

Rodríguez also explained the operation of chambers of commerce in Spain, in addition to business clubs that represent spaces for B2B meetings.