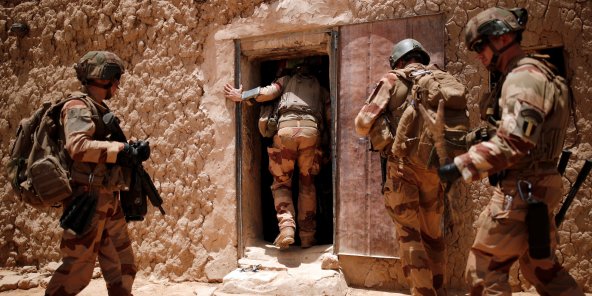 French President Emmanuel Macron will officially announce on Wednesday (9 November) the end of the anti-jihadist Operation Barkhane in the Sahel, but this will have no impact on the French military presence in the region, according to a statement from the Elysee Palace.
This announcement comes a little less than three months after the withdrawal of French soldiers from Mali. The Barkhane force counted up to 5,500 soldiers at the height of its deployment in the Sahel. Pushed out of Mali by the junta in power since 2020, which is now being supported, despite repeated denials, by the Russian paramilitary group Wagner, the French army left the country for good in mid-August, after nine years of fighting the jihadists. It remains in the region, however, with some 3,000 French troops still deployed in Burkina Faso, Chad, and Niger, and continues to fight against jihadist groups linked to al-Qaeda or the Islamic State group, which are gradually expanding their activities to the countries of the Gulf of Guinea.
According to the Elysée, the principle is “to reduce the exposure and visibility of our military forces in Africa, to focus on cooperation and support, mainly in terms of equipment, training, intelligence, and operational partnership when the countries wish it“. As soon as the departure of Mali was announced in February, Paris announced its willingness to launch discussions with African states on this issue. Even if it does not intend to abandon the fight against jihadism, France has to deal with an increasingly hostile African public opinion, in which the influence of rival powers, led by Moscow, is growing via social networks and official media.