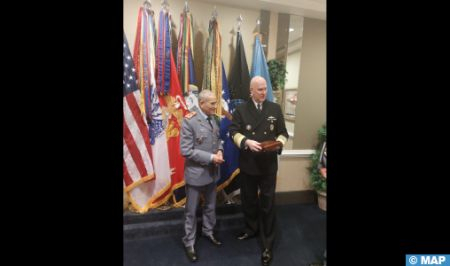 Defense: Morocco & U.S. agree to work together against challenging security issues in Africa

Morocco and the Pentagon have agreed to continue to work together on counterterrorism, maritime security in the Mediterranean, and other pressing security issues on the African continent.

The agreement was reached during the 12th U.S.-Morocco Defense Consultative Committee (DCC) held in Washington Nov.7-8 under the co-chairmanship of Under Secretary of Defense for Policy Dr. Colin Kahl and Lt. Gen. Belkhir El Farouk, Inspector General of the Royal Moroccan Armed Forces and Southern Zone Commander.

The DCC reaffirmed the importance of the U.S.-Moroccan bilateral security and defense relationship, said the Pentagon in a press release, affirming that both countries continue enhancing their strategic partnership and working together to achieve goals outlined in the 2020-2030 U.S.-Morocco Roadmap for Defense Cooperation.

The meeting was an opportunity to review progress made on the recent Bilateral Country Action Plan (BCAP) and to ensure continued progress towards the goals of the roadmap of their military cooperation.

At the Pentagon, the Moroccan and U.S. Delegations discussed a wide range of topics including security cooperation, modernization and interoperability, intelligence capacity building, peacekeeping operations, countering illicit activities. Morocco’s role as a regional security leader was also highlighted at the meeting.

During the DCC meeting, Lt. Gen. Belkhir El Farouk voiced concerns over the security threats North Africa & Sahel-Sahara regions are facing due to intervention of extra-regional actors and their collusion with separatist movements, making reference to Iran.

Morocco, he said, is determined to counter these threats through strengthening its alliances and its operational capabilities to defend its territorial integrity and ensure the security of its borders, said a statement released by the General Staff of the Royal Moroccan Armed Forces.

The Moroccan General also hailed the excellent cooperation ties with the U.S. in military training and joint drills in addition to supply of high-performance equipment and war materials with the necessary technical support.