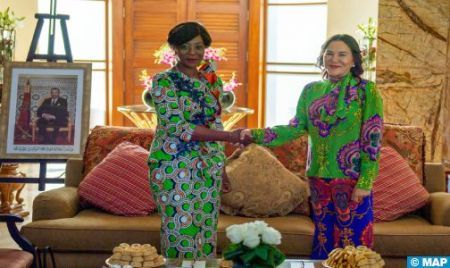 In a statement to the media after the meeting, Arlette Soudan-Nonault expressed her gratitude and appreciation for the efforts undertaken by Princess Lalla Hasnaa, especially in mobilizing the financial resources needed to achieve global sustainable development and move towards the energy transition.

“Thanks to all these efforts, we have moved from a proposal approach to the applied scientific aspect,” she said, explaining that the Congo Basin Climate Commission, like the other two commissions, has clear, defined and ambitious action plans.

“We are happy today because we are entering an important phase which is the effective mobilization of the Fund’s resources,” said the Congolese minister, expressing her gratitude for the actions taken by Morocco at this level.

She also recalled the challenges facing the Congo Basin, which are mainly related to human behavior, citing unsustainable agricultural and pastoral practices.

This challenge threatens the Republic of Congo and neighboring countries that aspire to develop their respective economies and adapt to population growth.

The Congo Basin is the second largest tropical forest region after the Amazon. It accounts for 10% of the world’s biodiversity and is home to more than 10,000 plant species and over half of Africa’s animal species, many of which are at risk of extinction.

The basin is one of the world’s largest carbon reserves and contributes to the global climate balance. It provides food, water and shelter for over 75 million people. Intensive logging, fires and illegal hunting are accelerating deforestation, threatening the survival of the ecosystem and undermining indigenous populations.

The Blue Fund has been set up during COP22 held in Marrakesh, Morocco, in 2016. The Fund supports green and blue economy as well as national and cooperative projects in countries of the Congo Basin.

The sustainability of environmental and socio-economic solutions, climate adaptation and regional integration of policies are the priorities of the Blue Fund.