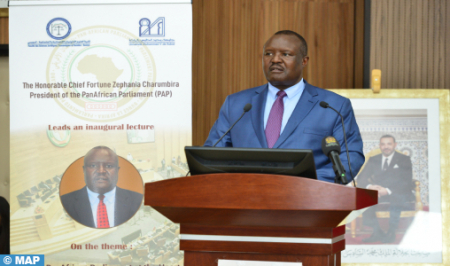 Cooperation and solidarity among African countries and peoples are essential to meet the challenges of development in the continent, Pan-African Parliament (PAP) President Fortune Zephaniah Charumbira said Monday in Rabat.

Speaking at an inaugural course at the College of Legal, Economic and Social Sciences under the theme “The Pan-African Parliament at the heart of current challenges,” Zephaniah Charumbira called for an African alliance and inter-African cooperation to meet the challenges of food security and health in Africa.

On the different challenges facing the African continent, the PAP President stressed the importance of youth participation in decision-making to meet the challenges of development in Africa, where more than half the population is young.

Promoting democracy and good governance, maintaining peace and security, and addressing food insecurity are among the other challenges raised by Zephania Charumbira, who also mentioned Covid-19 health crisis management.

For his part, the President of Mohammed V University in Rabat, Mohammed Rhachi, congratulated Zephania Charumbira for his election as president of the Pan-African Parliament, and hailed the institution which seeks to strengthen the bonds of brotherhood and cooperation between African countries and ensure the development of the continent by placing the African citizen at the heart of public policy.

At a meeting earlier Monday with Speaker of the Moroccan parliament upper house, Fortune Zephaniah Charumbira pleaded for the establishment of unified institutional structures while stressing the need to boost his institution’s legislative work, especially in the areas of trade, economy and immigration.

PAP is working with national parliaments and regional economic commissions to establish a platform for consultation dedicated to the discussion of all issues and challenges in Africa, he said, noting that the issues under consideration in these institutions necessarily involve cooperation on continental and regional levels and even beyond.

He also noted that his current visit to Morocco at the head of an important delegation aims to mark the resumption of work in the Pan-African Parliament, which has been at a standstill for two years due to the repercussions of the COVID-19 epidemic and some dissensions that arose during the election of the parliament’s bureau.

“This continental institution has finally returned to a climate of understanding, consensus and transparency by managing to iron out the differences,” he said.

Referring to the challenges posed in Africa, he noted that the health crisis has revealed the fragility of the health system in the continent, and praised the exceptional Moroccan experience in the field of prevention and management of the mass vaccination operation.

North Africa Post's news desk is composed of journalists and editors, who are constantly working to provide new and accurate stories to NAP readers.
NEWER POSTMorocco at UNGA asks Algeria to take a hard look in the mirror
OLDER POSTMEP blasts Algeria’s repeated violation of its trade commitments as unacceptable