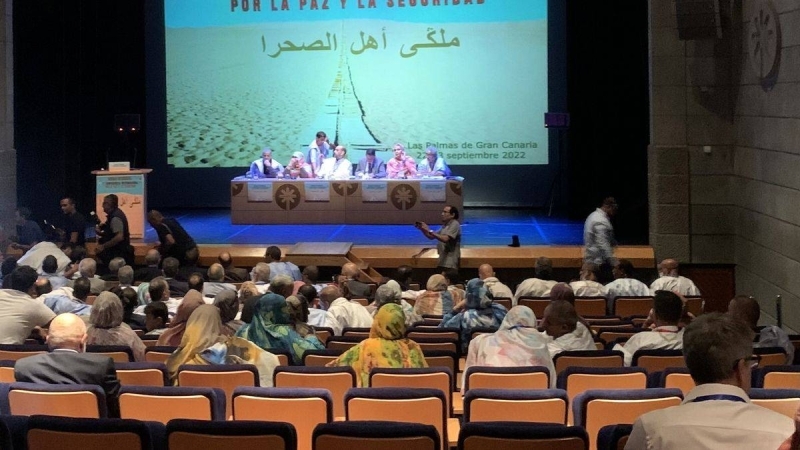 The 1st International conference for Peace & Security, held in Las Palmas (Canary Islands) Sept. 22-23, wrapped with a manifesto affirming that the Autonomy Plan offered by Morocco for a lasting resolution of the Sahara issue is the starting point for reaching a compromise solution ushering in a new era of peace and prosperity.

The conference was organized by the Saharawi Movement for Peace (MSP), a movement set up by opponents to the polisario separatist front, with the support of Saharawi tribal chiefs and several other international personalities and NGOs. It has laid out a roadmap for resolving peacefully the Sahara regional conflict.

In their manifesto, participants stressed the need to build up trust in the role of the UN to advance towards a compromise solution, support UN Sahara envoy Staffan de Mistura and expand dialogue to include new leaders, such as Sahrawi notables, in the search for a peace agreement.

They hailed the supportive stand of the Spanish Government of the autonomy plan described as the “most serious, credible and feasible” solution and called for enhancing the role of Sahrawi notables.

The participants warned against the negative impacts of the stalemate on the stability of the whole region and deplored the sufferings endured by families separated for decades due to intransigence of a minority.

Among the attendees, former Prime minister José Luis Rodríguez Zapatero, who hailed the “serious & credible” Moroccan autonomy plan for the Sahara, while former Spanish Defense minister & ex-chief of intelligence, José Bono told the Algeria-backed polisario separatist group to be realistic as the referendum option has been dropped definitively by the UN Security Council because it is not doable and is unworkable.

Former U.S. Ambassador to Morocco, Edward Gabriel called on the UN Security Council to move towards a lasting political solution to the Sahara issue based on the autonomy plan proposed by Rabat.

Several Cheikhs and notables of Sahrawi tribes insisted that the autonomy plan is the only viable solution to the Sahara regional conflict, and affirmed that the polisario, which still clings to outdated positions, does not represent the Sahrawi population.