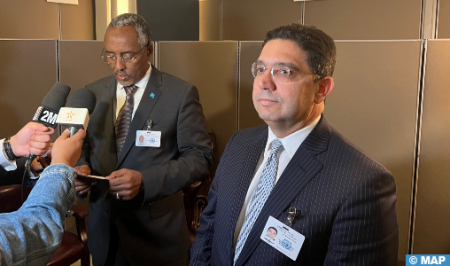 Somalia to Open Embassy in Rabat, Consulate in Dakhla

Somalia announced Friday in New York its decision to open an embassy in Rabat and a consulate general in Dakhla.

“Somalia decides to open an embassy in Rabat and a consulate general in Dakhla,” said the Somali Minister of Foreign Affairs, Abshir Omar Jama, after a meeting with his Moroccan peer Nasser Bourita, on the sidelines of the United Nations General Assembly.

Somalia and Morocco “support their mutual sovereignty and territorial integrity,” said the head of Somali diplomacy in a press statement.

The two countries have long-standing relations based on friendship and solidarity, he added, paying tribute to the support of King Mohammed VI to African countries and his vision for Africa’s development and stability.

The Somali minister also said that a roadmap of cooperation will be signed between the two countries.

This meeting took place in the presence of Permanent Representative of Morocco to the United Nations, Omar Hilale.