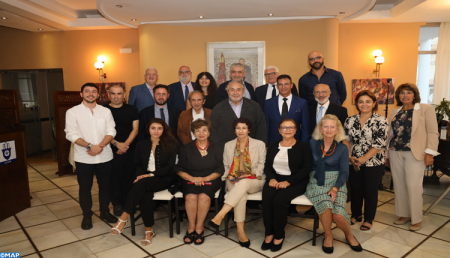 The Center is tasked, among other miswsions, to conduct scientific studies, in partnership with Abdelmalek Essaâdi University and in collaboration with eminent Moroccan and international researchers, in order to better understand and present this community to the widest possible audience in Morocco and abroad, residents or visitors, of all faiths.

Managed by a committee of personalities from Belgium, France, Spain, Brazil, Israel, the United States and Morocco, the CJNM is part of a series of initiatives of the Moroccan Jewish community, led by the Israeli Community of Tangier, Donna and Haïm Benchimol Fondation.

“This center is specially dedicated to the study and research on the Judaism of northern Morocco, including its customs, history and language,” said president of the Jewish community of Tangier, Serge Berdugo. This institution will have the mission of collecting, preserving and promoting a common culture not only to the Jews of Morocco, but also to Andalusians, he said.

In a statement to the press on the sidelines of this meeting, Berdugo stressed that this center is in line with the enlightened vision of King Mohammed VI for the preservation of the plural identity of Morocco and the high solicitude of the Sovereign for the religious thing in general, and places of worship in particular.

For his part, president of the Council of the Moroccan Community Abroad (CCME), Driss El Yazami, said that this meeting brought together prominent figures, including historians, academics and people interested in the memory of the Jews of northern Morocco. The objective was to create a center that focuses on the particularities and culture of the Jews of the northern region, including Tetouan, Assilah, Larache and Tangier, Yazami said.