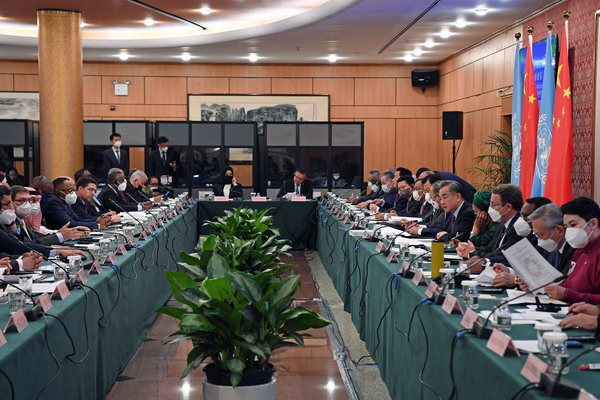 Speaking Tuesday at a High-Level Ministerial Meeting of the Group of Friends of the Global Development Initiative (GDI), Bourita stressed that under the leadership and vision of King Mohammed VI, Morocco established solid and multidimensional cooperation with African countries through initiatives and partnerships.

The FM cited, in this sense, the Triple S initiative to promote sustainability, stability and security in Africa, the AAA Initiative to adapt African agriculture to climate change, the provision of drugs and medical equipment to African countries during the pandemic of Covid-19, in addition to cooperation in the areas of food security, fertilizers and climate change.

Bourita congratulated China on the launch of the GDI, praising Beijing’s efforts to promote sustainable development. The launch of this initiative comes at an appropriate time and in an unprecedented context marked by the triple crisis of health, food and energy, besides the quest for appropriate solutions to international challenges, he said.

“The initiative also comes seven years before the deadline for achieving the Sustainable Development Goals (SDGs). While significant progress has been achieved in several regions of the world, several countries, severely affected by the implications of the Covid-19 pandemic, are lagging behind in reaching these goals,” the minister explained.

Bourita called the initiative an example of dynamic partnership to strengthen and promote international cooperation, including South-South cooperation to implement the 2030 Agenda for Sustainable Development.

“The initiative will certainly contribute to strengthening global solidarity and support the efforts of developing countries to meet their development commitments, especially in the current global context,” the minister said at the meeting held on the sidelines of the 77th UN General Assembly.

Bourita also noted that Morocco’s support for the GDI initiative stems from the friendly ties that Morocco and China have maintained for decades.

These relations have gained new momentum since the visit of King Mohammed VI to China in 2016, a visit that culminated in the launch of a strategic partnership between the two countries, he recalled, adding that bilateral trade jumped by 50% between 2016 and 2021.

China’s investments in Morocco have increased significantly with more than 80 projects in various fields, he said.

Bourita also noted that in the Covid-19 context, cooperation between Morocco and China has resulted in a partnership in the field of health and vaccination. This partnership resulted in the establishment of an industrial unit to manufacture anti-Covid vaccines. This infrastructure will contribute to the self-sufficiency of Morocco and its health sovereignty.

Cooperation ties between the two countries have been strengthened with the signing, earlier this year, of an agreement on the implementation of the Belt and Road Initiative. Morocco is among the first African countries that joined this initiative, he recalled.

The FM reiterated Morocco’s support for the Global Development Initiative, which will undoubtedly contribute to accelerating progress towards achieving SDGs, particularly in Africa.

The Ministerial Meeting of the Group of Friends of the Global Development Initiative (GDI) reviewed the positive progress made since the GDI was proposed, particularly after the High-level Dialogue on Global Development held on 24 June 2022.

The participants had an in-depth exchange of views on deepening practical cooperation in various priority areas of the GDI, accelerating the implementation of the 2030 Agenda for Sustainable Development and the achievement of the Sustainable Development Goals, promoting institutional arrangements of the Group, and strengthening cooperation with the UN development system aligned with national priorities and needs. They discussed the way forward for GDI cooperation and reached broad consensus.