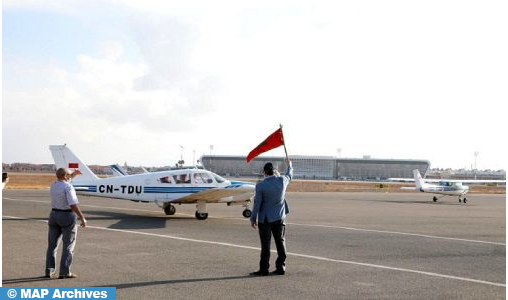 Participants in the 38th Toulouse-Saint Louis (Senegal) Air Race, which started Saturday, will make stopovers in the Moroccan Saharan cities of Tarfaya, Dakhla and Laâyoune.

Twenty-eight planes with pilots from France, the U.S., Germany, Norway, the United Kingdom, Belgium and Peru are taking part in this year’s rally to end Sept.30.

The light airplanes took off from Toulouse before touching down in Alicante (Spain), Tetouan, Casablanca,Tit Mellil, Fez, Essaouira, Agadir and Tan- Tan.

The rally’s next legs include stopovers in Tarfaya, Dakhla, Laâyoune, Nouadhibou (Mauritania) and Saint-Louis (Senegal).

Launched in 1983, this rally pays tribute to the pioneers of Compagnie Générale Aéropostale, who took off from Toulouse-Montaudran to deliver mail in the southern hemisphere, following the air route mapped out by French aviator Pierre-Georges Latécoère to connect France to the French colonies in Africa and South America.

Airborne postal services developed after World War I thanks to the bravery of its earliest pilots. During the 1920s, every flight was a dangerous, and sometimes fatal, adventure. The period was described by French writer Antoine de Saint-Exupéry – himself an Aéropostale pilot – in his novel “Night Flight”.