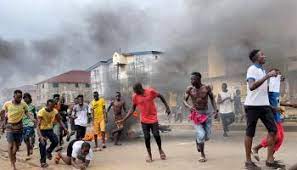 Dozens died in anti-government protests in Sierra Leone’s capital of Freetown and two other towns on Wednesday, August 10 as shocked citizens sought safety behind closed doors.

Authorities in Sierra Leone have said at least 21 civilians and six police officers have been killed in clashes that broke out during anti-government protests. In Freetown, hundreds took to the streets in frustration at economic hardship and a perceived failure by the government to cushion the impact of rising prices.

The protests were a way to express anger over the soaring cost of living under President Julius Maada Bio’s government that has gone up more than 40% within a few months. The protestors barricaded the streets and reportedly threw stones at police, sparking a confrontation that led to the deaths.

The unrest is highly unusual for Sierra Leone, especially in Freetown. A few people have been killed in isolated protests in other cities in recent years. President Maada Bio said the circumstances surrounding Wednesday’s events would be “fully investigated”.

An eerie calm had returned to Freetown on Thursday, residents said, as stores were closed and people stayed in out of fear of unrest. Police said a curfew would remain in effect from 7pm to 7am local time from Thursday after the government imposed a 3pm curfew on Wednesday in an attempt to stem the violence.