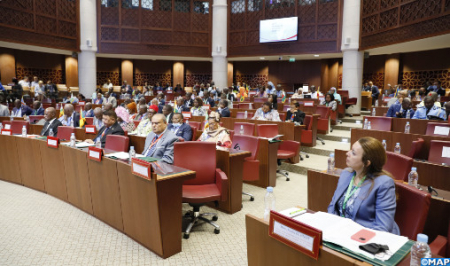 French-speaking parliamentarians stressed, Thursday in Rabat, the need to respect the principles of democracy to ensure peace and stability in French-speaking African countries, highlighting their role in promoting commitment to democratic values.

This came during a panel discussion, held part of the 28th Regional Assembly of the Parliamentary Assembly of La Francophonie (APF), convened in Rabat June 23-24.

Participants in the panel, chaired by the Speaker of the National Assembly of Côte d’Ivoire, Adama Bictogo, underlined the key role parliamentarians can play in ensuring respect for democratic principles.

Francophone parliamentarians have a responsibility to ensure governance and regional stability within the continent, especially in the process of political mediation, Adama Bictogo said, noting that 95% of political crises in Africa arise from electoral disputes.

For his part, the chargé de mission for Africa at the APF, Sansan Tilkouété stressed that the notion of democracy is closely linked to other concepts such as elections, alternation, law, individual freedom, freedom of the press, security, equity, equality and so on.

“Democracy is a desirable practice and its globalization is more than desirable for a better consideration of all the aspirations of peoples,” he said.

This meeting served as a platform to showcase the experiences of several African countries such as Benin, Gabon, Cameroon, Guinea, Morocco, Senegal, Côte d’Ivoire and the Central African Republic.

In an opening address before the assembly, the Speaker of the House of Representatives (Lower House) stressed the need for African parliamentarians to act as a united block to defend the cause of Africa, pointing out that parliamentarians’ unity as members of the APF and as Africans will enable them to advocate effectively the cause of Africa, by preaching global solidarity against narrow nationalism and by ending the exclusion of certain populations or regions from the benefits of progress.

According to the Moroccan MP, it would be unrealistic to speak of stability and development if Africa is not free from the many pressing challenges, including the threat of terrorism and violent extremism, the resurgence of unconstitutional changes of government, or the various impacts of global warming.

He however called for remaining optimistic and trying to see this multidimensional crisis as a chance to give new meaning to multilateralism and international solidarity, principles that are at the heart of the action of Francophonie.

The agenda of the 28th Regional Assembly of the APF, hosted by the Moroccan Parliament, covers several topics including democracy; African Continental Free Trade Area; women’s participation in political, economic and social life; the involvement of parliamentarians of French-speaking Africa in environmental issues and climate change as well as the political, social and health situation in French-speaking African countries.

The participants shall also examine the activity report of the regional assembly and the restructuring of the leadership positions of the African region within the APF bodies in preparation for the 47th Session in Kigali (July 2022).

Founded in 1967, the APF seeks to reflect the multiculturalism of the French-speaking world and its people. It brings together delegates from nearly 90 parliaments or interparliamentary organizations from the five continents.