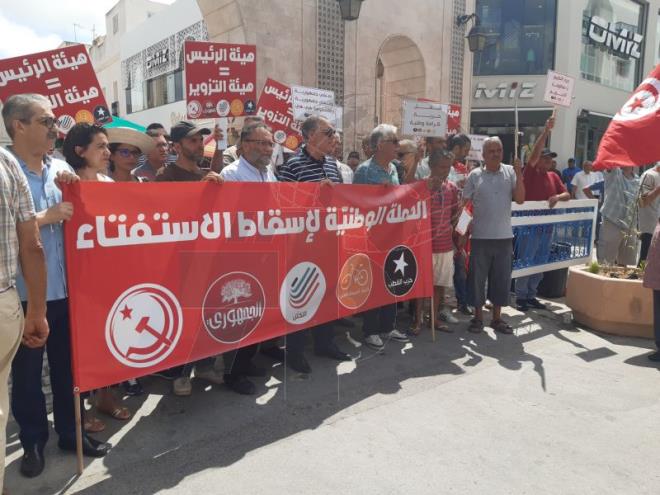 The draft of Tunisia’s new Constitution to be put to referendum in July is expected to be unveiled this Monday, while protests calling for the referendum boycott are continuing.

The draft will be presented to President Kais Saied, law expert Amine Mahfoudh said Sunday, according to Webdo Tunis.

The constitutionalist is member of a national consultative commission established by the President to draft a new constitution that will replace that of 2014, adopted in the wake of the 2011 revolution that removed former autocratic leader Ben Ali.

President Saied initiated the national dialogue after he seized all major powers on July 25, dissolving the parliament, and seizing the executive power. He argued that the move is meant to restore the country but he suffered criticism at home and abroad, as the referendum meets neither national nor international standards.

In this connection, a protest movement staged on Sunday in the capital Tunis, at the initiative of the National Salvation Front, called for a boycott of the July 25, 2022 referendum, considering that the whole process leading up to this deadline is “illegal.”

The protesters held up banners telling the President “get out” and shouted slogans hostile to the exceptional measures that they described as a “putsch” against the State and the 2014 Constitution, reports TAP news agency.

The opponents of President Kaïs Saïed also denounced the appearance of civilians before the military justice system as well as all attempts “by the ruling power” to subjugate, according to their own words, the justice system to the service of the President of the Republic and his agenda.

They criticised in this regard, the dismissal of 57 judges without allowing them to appeal.

Front constitutive committee member Ridha Belhaj said that the rejection of the referendum is expanding and now includes various parties which despite their differences agree that the President of the Republic’s process has strayed from the Constitution.

He affirmed that militant actions will continue to bring down Kaïs Saïed’s project, which jeopardizes the national gains achieved since 2011, namely freedoms and the peaceful transfer of power as well as the organization of free and transparent elections supervised by an independent authority.

Mohamed Goumani, member of the Ennahdha movement, one of the components of the National Salvation Front, said that this movement supports judges following the “unconstitutional” dismissal of 57 of them “for refusing to be involved in political settling of scores.”

In a statement to TAP, member of the National Salvation Front constitutive committee Chaima Issa explained that this movement is part of a set of actions aimed at countering “the putsch” and ensuring the return to the functioning of legitimate institutions. She considered that it would have been possible to solve the pre-July 25 problems by means of the law and the constitution rather than by the monopoly of power and “the putsch,” which has led to a deep economic crisis and isolated the country from its international environment, she regretted.

The National Campaign against the July 25, 2022 referendum also staged on Sunday a protest movement at the entrance of the medina of Nabeul and a march towards the local seat of the Independent Higher Authority for the Elections (ISIE).