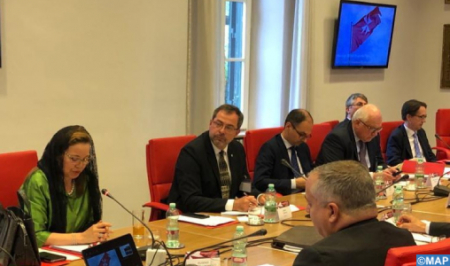 “The religious diplomacy of the Kingdom, a leader in the promotion of tolerant Islam, has demonstrated its effectiveness in the fight against extremism and radicalization thanks to the High Orientations of the Commandery of the Faithful, pillar of the security of the country in its spiritual, moral and political aspects”, underlined Mrs. Naji Mekkaoui, during a conference on diplomacy and religion.

The conference was organized by the Sovereign Order of Malta and the U.S. think-thank “Transatlantic Policy Network on religion and diplomacy”, and was marked by the participation of high-profile diplomatic personalities in Rome and the Vatican.

In her presentation, the Moroccan diplomat noted that “the Commandery of the Faithful, as history and reality prove, guarantees peace, security and stability and ensures Morocco an immunity against all kinds of extremism and ignorance, through the consecration of ‘a moderate Islam’. “The Kingdom draws its foundations from the true values of Islam, in particular tolerance, coexistence and living together,” she said.

“Morocco, thanks to an enlightened royal vision, has given a particular interest to the establishment of an efficient framework for religious education, which aims to protect the Kingdom’s religious frame of reference, the foundations of which are the Commandery of the Faithful, the Ash’arite doctrine, the Maliki rite and Sunni Sufism,” she pointed out.

In this regard, the diplomat highlighted the success of the Moroccan experience in the management of the religious field both at the level of worship places and in terms of authentic teaching and training of imams.

She also recalled religious diplomacy initiatives, launched by King Mohammed VI, with a view to promoting the Moroccan model and correcting the image of religion among some, and mentioned the creation of the Mohammed VI Foundation of African Ulema, the Supreme Council of Ulema, the European Council of Moroccan Ulema and the Mohammed VI Institute for the training of Imams, Morchidines and Morchidates.

“As an active and committed player in the region, Morocco is continuing its tireless efforts, through its religious diplomacy, to promote peace and dialogue,” said the diplomat, referring in particular to the historic Al-Quds Call, signed by the King, Chairman of the Al Quds Committee, and Pope Francis during his visit to the Kingdom in March 2019.

Under the impetus of King Mohammed VI, Morocco has also embarked on several mediation and support initiatives, particularly in the Middle East and in Libya, demonstrating its unwavering commitment to the peaceful settlement of conflicts and its conviction in the value of diplomacy, said Ms. Naji Mekkaoui.

Highlighting “Morocco’s reputation as a moderate Muslim country and a reliable partner”, the ambassador underlined that the Kingdom’s strategy has “also made it possible to achieve successive diplomatic breakthroughs regarding the conflict over the Moroccan Sahara”.