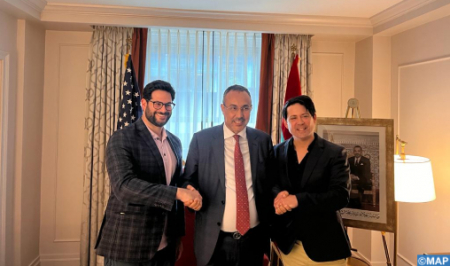 The US groups, Danforth Investors Global Special Projects and SEC Newgate US, have signed memorandums of understanding with the Council of the Dakhla Oued Eddahab region on the promotion of American and international investment in this region of the Kingdom.

These agreements were initialed Monday in New York by the President of the Council of the region, Yanja El Khettat, the Chief Executive Officer of the Danforth Investors Group, Ari Matityahu, and the President of SEC Newgate US, Michael Holtzman.

The signatory parties agree to join efforts for the promotion of investments in a region endowed with a strategic location in the South of the Kingdom of Morocco, qualified human capital and huge assets to become a real integrated lever for optimal socio-economic development.

The signing of the MoUs took place on the sidelines of the Morocco-U.S. Investment Forum, organized last Friday in the American metropolis by the regions of Dakhla Oued Eddahab, Laayoune-Sakia El Hamra and Guelmim Oued Noun, in partnership with the ministry of Industry and Trade.

The forum highlighted by presentations on the major infrastructure projects underway in Morocco’s southern provinces and which are attracting more investments.

During the forum, Mr. Matityahu underlined that Morocco, a “stable and advanced” country, now presents itself as a “phenomenal” business destination, under the leadership of King Mohammed VI.

Noting that the Kingdom offers enormous investment opportunities, particularly in the fields of energy, logistics, tourism, new technologies and agriculture, the American businessman said he was encouraged to do more business with Morocco.

The businessman, on this occasion, announced that all the companies in the portfolio of Danforth Investors (35 around the world) are committed to investing in the signatory countries of the historic agreement inked by Morocco, the United States and Israel.