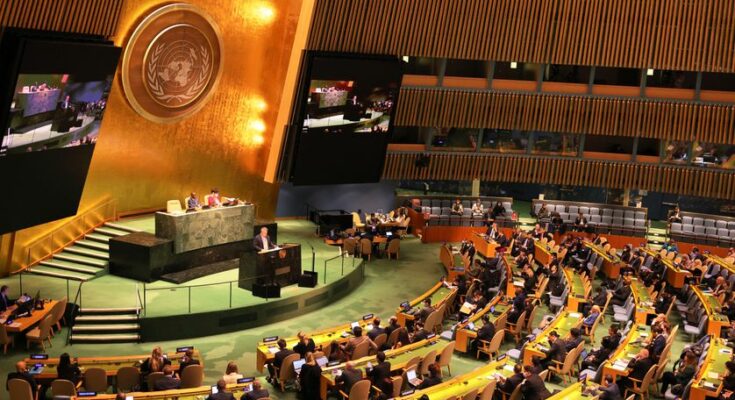 The autonomy plan put forward by Morocco for a lasting resolution of the Sahara conflict continues to gain growing international support, being described as the best and pragmatic solution, while the armed Polisario militias continue to receive global condemnation for serious human rights violations and crimes committed in the Tindouf camps in Algeria.

Addressing members of the UN Committee 24 convening in New York, Morocco’s permanent representative to the UN Omar Hilale said “the Moroccan nature of the Sahara” is confirmed legally and historically, and is as well internationally recognized, including through repeated acknowledgements today.

Reaffirming support for the United Nations plan for the political, realistic and pragmatic resolution of this issue, he said his country will implement the steps enshrined in the four most recent resolutions of the Security Council.

Regarding the Moroccan autonomy initiative, he said it enjoys ever-expanding support from many countries. It is the only credible and serious solution that will bring together Arab and African States, he said, adding that the Sahara is a region of calm and stability. Its residents enjoy all their rights as well as social and economic development because of their status as part of the Moroccan territory.

Despite the lies of other parties, there are no wars or conflicts in the Moroccan Sahara, which hosts international conferences, and continental sports events and meetings, and attracts a growing number of tourists, he said.

Stressing that the population of the Moroccan Sahara enjoys all civil and political rights, including those of freedom of movement and assembly, the diplomat recalled their political and electoral participation in the recent regional elections of September 2021.

The diplomat stated further that Algeria is the primary party responsible for this Sahara conflict. The UN Security Council has called on Algeria to participate in further roundtables and cooperate with the Secretary-General’s Envoy, he said, adding that the country’s refusal to participate in the roundtables after the first two is a violation of international norms.

Foreign minister of Guatemala, Mario Adolfo Bucaro Flores welcomed Morocco’s efforts seeking to reach a political solution in the Sahara, saying the autonomy initiative presented by Rabat in 2007 is a realistic and credible step forward to resolving the conflict for the sake of stability, security and integration of the Maghreb region.

Senegalese ambassador to UN Cheikh Niang reiterated his country’s support for a realistic, just, enduring and mutually acceptable solution to the Sahara issue, on the basis of Security Council resolutions.

The Moroccan autonomy initiative remains the appropriate framework to move forward, he said, hailing the economic and social development in the Sahara.

Senegal has opened a consulate in the Sahara, he said, welcoming the recent Moroccan elections held with the significant participation of the people of Sahara, who were also able to elect their own leaders.

For his part, Burkina Faso ambassador to UN Seydou Sinka has reaffirmed his country’s firm backing to the UN-led political process which aims to reach a realistic political solution.

Welcoming the appointment of the Secretary-General’s Personal Envoy, he encouraged the Envoy to resume the roundtable process and echoed the Council’s call to all stakeholders to remain committed to this process.

He voiced support for the Moroccan autonomy initiative, citing in this regard the UN Security Council resolution 2602 (2021), and stressed that a political solution requires increased cooperation among the States of the Maghreb.

The representative of Yemen, Abdulrahman Hasan Yahya Al Barati expressed support for the brotherly country of Morocco in the Sahara region, and rejected all attempts to violate the Kingdom’s sovereignty and territorial integrity.

Jordanian Mohannad Adnan Moussa Shaddad underlined the longstanding cooperation ties between his country and Morocco, and joined other speakers in commending Morocco’s efforts to improve the socioeconomic development and the well-being of the region’s inhabitants.

Dominica information minister Kelver Dwight Darroux reaffirmed his country’s support for the Morocco Autonomy Plan, and commended the kingdom’s efforts to develop the Sahara, which has resulted in improved living standards and broader opportunities for inhabitants of the southern provinces. Indeed, that has been evident in improved infrastructure and advancements in health care, education and housing, he pointed out.

Local Sahrawi elect, Ghalla Bahiya, Vice-Pdt of Dakhla-Oued Ed-Dahab region, hailed the growing international recognition of Morocco’s autonomy initiative offered for the Sahara. She also recalled the strong participation of the local Sahrawi inhabitants in recent Moroccan elections, noting in particular that while women in the area continue to enjoy all their rights, those living in the Polisario-controlled Tindouf camps, in Algeria, continue to suffer abuses with the complicity of the host country.

M’Hamed Abba, vice-president of Laâyoune-Sakia El Hamra region, said the historic polls leading to his election confirm the Moroccanness of the Sahara.

Praising the new development model launched in 2015 with a sizable budget, he said the plan will enable the region to develop and become a gateway to Africa. He also stressed the importance of a political solution based on compromise, and welcomed the relaunch of the political process under the aegis of the United Nations.

Petitioner Agron Pali denounced the serious human rights violations committed by the Polisario leaders in the Tindouf camps, citing cases of rape and torture perpetrated with the blessing of Algerian army which has used live ammunition against residents of the camps who were trying to escape to Morocco.

He urged the international community to intervene to stop those atrocities and called on the UNHCR to open an investigation.
Touria Hmyene, speaking for the Association for freedom of women sequestered in Tindouf camps, shed light on the sufferings endured in these camps, citing daily forced disappearances, rapes, torture and other serious violations of human rights.

Algeria as the host country should bear the responsibility to protect the sequestered Sahrawis, she said, affirming that the humanitarian aid provided by the United Nations and donor countries to the Sahrawis held in Tindouf is being stolen by the Polisario militiamen.

Khadija Ezaoui, speaking for the Forum des Compétences Sahraouies à Laâyoune, said that Sahara has become “one of the most popular trading platforms on the regional, continental and global scale”.

It has become an area of stability and prosperity, she said, adding that the transformation of the Moroccan Sahara occurred within the framework of interregional solidarity. She also pointed to developments such as the extension of the electricity grid, access to drinking water and the establishment of infrastructure, including roads.

Khalid Bendriss, speaking for the Association for the Support of the Moroccan Autonomy Initiative, said Morocco’s proposal provides the population of the Moroccan Sahara with autonomy status with a clear division of power and elected legislative bodies. It also guarantees the population the right to manage their own political, economic and social affairs, while respecting the principle of Morocco’s sovereignty and territorial integrity. It is time for the international community to seriously consider that initiative, he stressed.

Meanwhile, petitioner Mohamed Ayad Saleck of the organization Khat Achahid said he is one of the many victims of the Polisario prisons, and is representing the Sahrawis who have refused to remain in the Tindouf camps.

Denouncing the grave violations of human rights occurring there, he cited instances of torture and called for a solution to be reached through negotiations with Morocco.

He voiced support for the dream of a greater Maghreb and urged the international community to move forward with Morocco’s autonomy initiative to end the sufferings of Sahrawis sequestered in the Tindouf camps.

North Africa Post's news desk is composed of journalists and editors, who are constantly working to provide new and accurate stories to NAP readers.
NEWER POSTAlgeria: Calls mounting for release of Ahmadi religious minority members
OLDER POSTMorocco reacts to arrest of its national in Donetsk