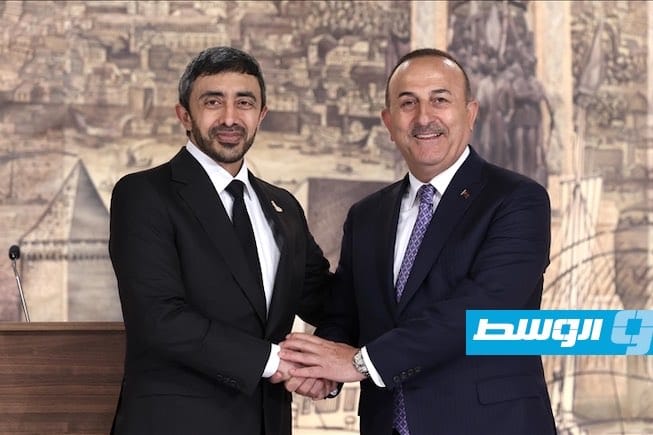 Turkey and the UAE vowed to leave aside their differences and work for stability in Libya where both countries back opposing sides and governments.

This came during a meeting last Friday in Ankara between the two countries’ foreign ministers, Mevlut Cavusoglu and Abdullah bin Zayed.

Turkish-Emirati relations have entered a new stage, the Turkish official said at a joint press conference following the meeting, pointing to the historical and cultural ties between the two countries.

“There were differences of opinion about Libya but now we are all working for the stability of this country,” Cavusoglu was quoted by Alwast news outlet as saying.

Both Turkey and the UAE have stakes in Libya. The oil-rich North African country has been embroiled in chaos since 2011 following the assassination of former leader Muammar Gaddafi in a NATO-sponsored revolution.

Dbiebeh was chosen Premier in March last year following a UN-backed agreement between various sides but the country’s parliament, the House of Representatives (HoR), sacked him in February this year and appointed Bashagha PM.

The HoR argued that Dbiebeh’s mandate came to an end on Dec. 24 after the country failed to hold the much-waited elections.

Dbiebeh enjoys the support of the UN, Turkey and several regional countries. Bashagha on the other hand is backed by Abu Dhabi and Cairo.

North Africa Post's news desk is composed of journalists and editors, who are constantly working to provide new and accurate stories to NAP readers.
NEWER POSTMorocco to send team of cybersecurity experts to Qatar ahead of 2022 FIFA World Cup
OLDER POSTOCP gets greenlight to set up organic fertilizers production & marketing company in Spain