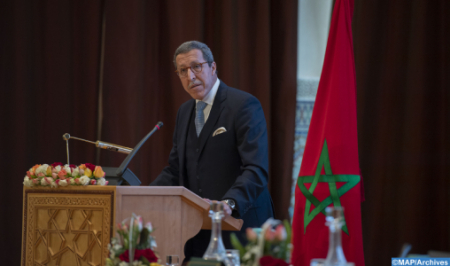 Morocco’s migration strategy is neither circumstantial nor opportunistic

Morocco’s migration strategy is neither circumstantial nor opportunistic. Rather, it embodies a natural symbiosis between principles and projections, said Permanent Representative to the UN, Omar Hilale.

Addressing the first International Migration Review Forum held in New York this week, the diplomat underlined that the strategy adopted by Morocco on migration is part of the natural symbiosis between the vision of King Mohammed VI and the international agenda on migration.

The royal vision, combining responsibility and humanism, is reflected in the National Strategy for Immigration and Asylum as well as in the international agenda on migration that is based on the same values,” he explained during the Forum devoted to the review progress made towards the implementation of the Global Compact for Safe, Orderly and Regular Migration adopted in Marrakech in 2018.

“Therefore, a coherent scheme is emerging around a vision and a conviction,” he noted, quoting King Mohammed VI as saying in one of his speeches: “It is for us to consolidate the coherence between the national, regional and global commitment, and to get closer to the objective of optimizing and organizing migration instead of fighting it.”

Morocco’s commitments in the field of migration are part of this effort. “They meet national needs with international repercussions. They are realistic, ambitious and multipartite, in that they are pan-societal and pan-governmental,” he said.

Announcing that migration will be taken into account for the first time in the national census to be conducted in 2024, the Moroccan diplomat also said that a module on international migration will be integrated into the permanent national employment survey.

“We will ensure the permanent integration of the human rights dimension in policies affecting migration,” he said, noting that Morocco will implement, with the International Organization for Migration (IOM) and other UN agencies, programs dealing with the impact of climate change on migration and inclusion.

He also expressed Morocco’s willingness to provide training on migration to Arab and African francophone countries.

Morocco, which hosts the African Migration Observatory in Rabat, advocates a cross-cutting approach to the migration issue, and has supported the adoption of a clear roadmap for better governance, through the 5+5 configuration at the Mediterranean level.

The Kingdom also opted, through the organization of the 1st Conference of the regional review of the Pact in the Arab region, for a coordinated approach and solidarity in a space sedimented with human movements.

He also emphasized the need to comply with the spirit and the letter of the Marrakech Pact, insisting that respect for the human rights of migrants, regardless of their status, is the compass of our common action.

The 1st International Migration Review Forum is both a milestone and a new beginning, and is above all an opportunity to assess the implementation of the Marrakech Pact, he said, adding that if the collective commitment is essential, so is the individual responsibility of States.

The 1st International Migration Review Forum, which brought together member states, observers, representatives of the UN system in addition to stakeholder groups, examined progress made at the local, national, regional and global levels in implementing the Marrakech Pact and addressed other concrete actions to better protect and support the world’s more than 281 million migrants through changes in policies and practices.

The event culminated in the adoption of an inter-governmentally negotiated declaration.