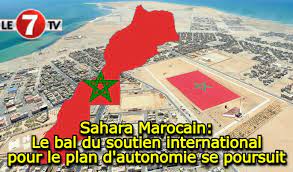 In just one day, Morocco has gained unprecedented international political and diplomatic support for its territorial integrity and sovereignty over its Sahara, leaving the enemies of the North African Kingdom in complete dismay and utterly gobsmacked.

On Wednesday, several foreign ministers who were attending in Marrakesh the meeting of the Global Coalition against Daesh/ISIS, have voiced or reaffirmed, during their side-talks with Moroccan peer Nasser Bourita, their strong backing to the Moroccan autonomy plan describing it as the most credible and serious solution to the Sahara regional conflict.

The unanimity around the credibility and seriousness of the autonomy plan was underlined without ambiguity by worldwide top diplomats in Marrakesh, recognizing the efforts made by Morocco for a peaceful and enduring solution to the Sahara issue.

In a joint statement issued after talks between Bourita and his Dutch peer Wopke Hoekstra, The Netherlands said it deems the autonomy plan, presented in 2007 by Morocco, as “a serious and credible contribution to the UN-led political process to find a solution to the Sahara issue”.

Amsterdam and Rabat availed this opportunity to reiterate their firm support to the UN Sahara envoy Staffan de Mistura and his efforts to continue the “political process aimed at reaching a just, lasting and mutually acceptable political solution” in accordance with UN Security Council resolutions.

The same support was renewed by Italy which hailed again the “serious” and “credible” efforts made by Morocco for the settlement of the Sahara issue.

“I welcomed the serious and credible efforts of Morocco for the settlement of the Sahara issue within the framework of the United Nations,” said the Italian Minister of Foreign Affairs, Luigi Di Maio, in a statement to the press after talks with his Moroccan counterpart.

Di Maio also reaffirmed “the full support of Italy to the efforts of the UN Secretary General, and his personal envoy Staffan de Mistura to achieve a political, fair, realistic, sustainable and mutually acceptable solution for the issue of the Sahara, based on compromise, and in accordance with the resolutions of the UN Security Council, particularly resolution 2602”.

The same supportive stand was voiced by Cypriot foreign minister Ioannis Kasoulides who underlined his country’s support to the autonomy plan offered by Morocco for a lasting solution to the Sahara conflict.

At a joint press briefing held with Moroccan peer, Mr. Kasoulides said Cyprus defends the principle of respect of territorial integrity of States, backs the resolutions of the UN Security Council and firmly rejects all separatist attempts targeting Morocco and his country.

For his part, Romanian foreign minister Bogdan Aurescu hailed the serious efforts made by Rabat to find a pragmatic & realistic political solution to the Sahara dispute and praised the Moroccan autonomy plan submitted to the UN Security Council in 2007.

In the joint statement released following his talks with Mr. Bourita, the Romanian minister reaffirmed his country’s support to the efforts deployed under the exclusive UN auspices to achieve a just, lasting and mutually acceptable political solution to the Sahara issue, based on compromise and UN Security Council resolutions.

Both parties stressed the positive and constructive role played by Rabat and Bucharest in maintaining stability, security and peace in their respective regions.

In the same vein, Serbian Minister of Foreign Affairs Nikola Selaković said his country views the autonomy plan, under Moroccan sovereignty, as a serious and credible solution to the Sahara issue.

During his talks with Bourita, Mr. Selaković commended the diplomatic and political efforts made by the North African Kingdom to achieve a realistic, pragmatic and enduring solution to the Sahara issue in a spirit of realism & compromise and in accordance with UN resolutions.

These numerous supportive stands, which are strengthening further Morocco’s historical and legitimate rights, come after similar positions expressed by several Arab and African foreign ministers on the sidelines of the Marrakesh Ministerial Meeting of the Global coalition against Daesh.

During his talks with Moroccan FM, Bahrain’s top diplomat Abdullatif Bin Rashid Al Zayani reiterated the constant position of his country supporting the Moroccanness of the Sahara, citing in this regard the opening of a Consulate General of Bahrain in the city of Laayoune, capital of Moroccan Sahara.

The Saudi Foreign Minister Prince Faisal bin Farhan on his part reiterated his country’s support of the Moroccanness of the Sahara and the territorial integrity of the Kingdom.

“The Kingdom of Saudi Arabia reiterates its position supporting the full sovereignty of Morocco over all its territories, including the Moroccan Sahara,” Prince Faisal stressed during a joint press briefing with Nasser Bourita at the end of their talks held on the sidelines of the Ministerial Meeting of the Global Coalition to Defeat ISIS.
The Saudi FM also stressed the support of his country to the autonomy plan presented by Morocco to resolve this artificial regional conflict.

In this vein, Yemen has also reaffirmed full support to the Moroccanness of Sahara.

The Yemeni official stressed “Yemen’s full support to the territorial integrity of the Kingdom of Morocco and to the Moroccanness of the Sahara.”

The settlement of this regional dispute “can only be done within the framework of the sovereignty of the Kingdom of Morocco and its national and territorial integrity,” he insisted.

For his part, Niger’s foreign minister Hassoumi Massaoudou renewed his country’s steadfast backing to the political process conducted under the UN exclusive auspices for the resolution of the Sahara regional dispute.

Guinean minister of Foreign Affairs Morissanda Kouyate also reaffirmed his country’s unwavering support of the autonomy initiative proposed by Morocco under its sovereignty.

“Guinea continues to deem the autonomy plan proposed by Morocco as the most serious and credible basis for resolving the Sahara conflict”, he said praising the “credible” efforts made by Morocco within the framework of the United Nations.

On Monday, Egyptian foreign minister Sameh Choukri said, during his meeting with Bourita in Rabat, that his country supports the territorial integrity of the Kingdom and UN Security Council resolutions 2602 of 2021, which welcomed Morocco’s serious and credible efforts to advance towards a political settlement of the Sahara issue.

This flurry of supportive stands for the Moroccan autonomy plan is part of the international dynamic gaining momentum to end the Sahara issue as the U.S., Spain, Germany, the Netherlands, France and worldwide capitals support the realistic proposal put by Rabat on the negotiating table.