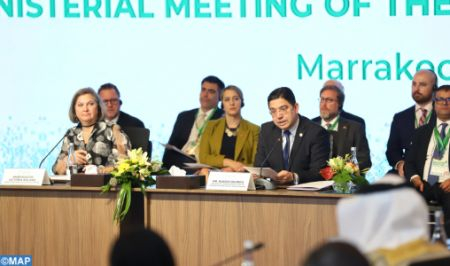 Separatism and terrorism are two sides of the same coins as fighters especially in Africa swap from one side to another, Morocco’s Foreign Minister Nasser Bourita said.

“The collusion against the sovereignty and stability of states, and the convergence of financial, tactical and operational means, create an objective alliance between terrorist and separatist groups,” Bourita told participants at the opening of the ministerial meeting of the global coalition to defeat ISIS held in Marrakech.

This has been confirmed by the increasing number of individuals crossing from separatist to terrorist groups and vice-versa, he said.

Bourita made it clear that those who back separatists are actually contributing to the spread of terrorism.

“Those who finance, shelter, support and weaponize separatism, are actually contributing to the expansion of terrorism and undermine regional peace and security.”

In this respect, Bourita urged more efforts to help African states deal with the scourge of terrorism through financing and capacity building.

He underscored Morocco’s involvement in backing African countries, as part of the Global coalition against ISIS, adding that Rabat advocates multilateralism and is ready to share its experience in the fight against terrorism.

This aid to Africa is all the more important as the continent has become the main target, suffering 41% of ISIS attacks worldwide.

The economic cost of terrorism has surged to 171 billion dollars, that could ideally have been invested in the continent’s development.

The terrorist threat in Africa has now reached the Atlantic coasts and its shipping routes. Links between terrorism and piracy appeared in the Gulf of Guinea, as seen in the Horn of Africa, he said, adding that terrorist groups are also seeking control of natural resources.

Officials from 85 countries and several organizations, including the Arab League, NATO and Interpol, are gathering in Marrakech, for the Global Coalition to Defeat ISIS’ first ministerial in Africa.

Co-hosted by Morocco and the U.S., the meeting is looking into “ways to sustain pressure on ISIS remnants globally” and counter the threat of Daesh in Africa wherein the jihadists are relocating after suffering major defeats and losses in the Middle East, Afghanistan and Pakistan.

Morocco’s hosting of the Ministerial meeting of the Global Coalition against ISIS shows the Kingdom’s firm commitment to counterterrorism, and its role in promoting regional security and stability.

The Coalition remains united and resolved in its determination to achieve the enduring defeat of Daesh wherever it operates, and to bringing those responsible for its terror acts to justice.