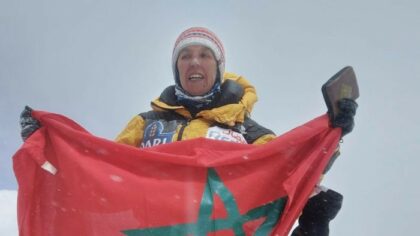 King Mohammed VI sent a message of congratulations to the Moroccan mountain climber, Bouchra Baibanou, who succeeded in hoisting the Moroccan flag high at the top of Annapurna in the Himalayas.

The Sovereign expressed his warm congratulations to Bouchra Baibanou for this achievement, whishing her more success in her brilliant mountaineering journey.

The King also praised the great efforts made by Bouchra Baibanou to achieve better performances in mountaineering, reflecting thus her will and determination to honor Moroccan women and to consecrate her distinguished presence at continental and international levels.

The Sovereign had bestowed on the alpinist a special award to honor her achievements in mountain climbing. This was on Throne Day in 2015.

By succeeding to climb the Annapurna summit in Nepal, last Saturday April 30, Bouchra Baibanou has become the first Arab woman to set foot on the 10th highest peak in the world, widely considered the world’s deadliest mountain.

The Moroccan mountain-climber started the challenge in March 2011 in Tanzania where she succeeded in climbing Africa’s highest peak, Kilimanjaro, the outlet recalled.

She traveled around the world to climb five more peaks, including Elbrus in Russia in July 2012, Aconcagua in Argentina in January 2014, Denali in Alaska in June 2014, Carstensz in Indonesia in November 2015, and Everest in May 2017.

When she successfully reached the tip of the Annapurna summit Saturday, the alpinist dedicated her achievement to all Moroccan people.

“I am very proud to succeed in climbing Annapurna 8091m, one of the most difficult summits in the world. It’s a gift for all the Moroccan and especially for the Moroccan, Arab and Muslim women,” she said.