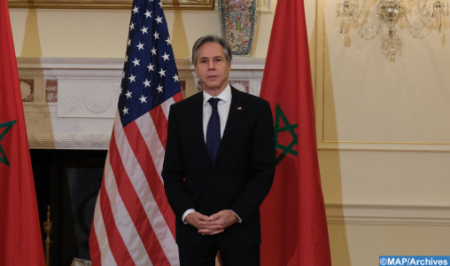 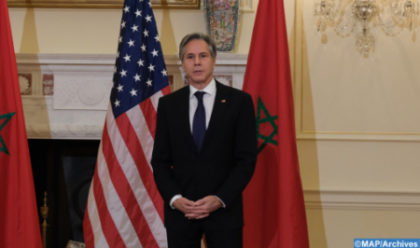 Morocco is a strong partner of the United States of America in the world, US Secretary of State Antony Blinken said Tuesday in Rabat where he discussed with Moroccan officials, including head of the government Aziz Akhannouch and Foreign Minister Nasser Bourita opportunities and challenges facing Morocco, efforts to advance its economic leadership in Africa, and avenues for additional U.S. support for Morocco’s initiatives.

Speaking during a joint press conference with Minister of Foreign Affairs, Nasser Bourita, following their talks, Blinken highly praised this partnership, saying the two sides are examining today “the means of reinforcement of this partnership, not only bilaterally but also to include other regions of the world, in particular the African continent”.

The United States views this partnership as strategic given the strong relationship between the two countries, he insisted.

“We are working together and directly for the benefit of our two countries and our two peoples”, in several areas including security cooperation and the fight against climate change and the new coronavirus pandemic, he said.

In this regard, Washington recognizes the important role Morocco plays in maintaining regional security and stability and contributing to the achievement of peace and prosperity in the region, Blinken said, noting that the two sides “cooperate closely in dealing with regional issues such as the Sahel, Libya and the fight against terrorism”.

Morocco has “demonstrated increased leadership within the Global Counterterrorism Forum and the Global Coalition against Daesh”, he underlined.

In terms of cooperation in the fight against climate change, the Secretary of State said that the multiplication of drought waves in Morocco, the United States and throughout the world makes it necessary to join efforts in the face of climate change.

He noted that Morocco is considered a pioneer on a global scale in this area, the Kingdom having set itself the ambitious objective of increasing the share of renewable energies in its energy mix to 63% by 2035.

Morocco is on track to meet and even exceed this target, Blinken said, noting that 45% of Morocco’s electricity production comes from renewable energy sources.

On the other hand, he said that Morocco and the United States are working together in the fight against the COVID-19 pandemic, welcoming the efforts made by the Kingdom in this area under the leadership of King Mohammed VI.

Blinken stressed that the United States greatly values Morocco’s contribution to efforts aimed at fighting this pandemic in other countries.

The Secretary of State underlined his country’s commitment to work jointly with Morocco to achieve tangible progress in priority areas, such as the promotion of freedom of expression, the creation of associations, reform of the criminal justice system, women’s rights and gender equality.

This visit is an opportunity to review the different aspects of a solid and multifaceted cooperation between two allies sharing a common vision and values and driven by the same determination to open up new prospects for partnership in the service of development and regional and international peace, according to a statement issued by the U.S. State Department.