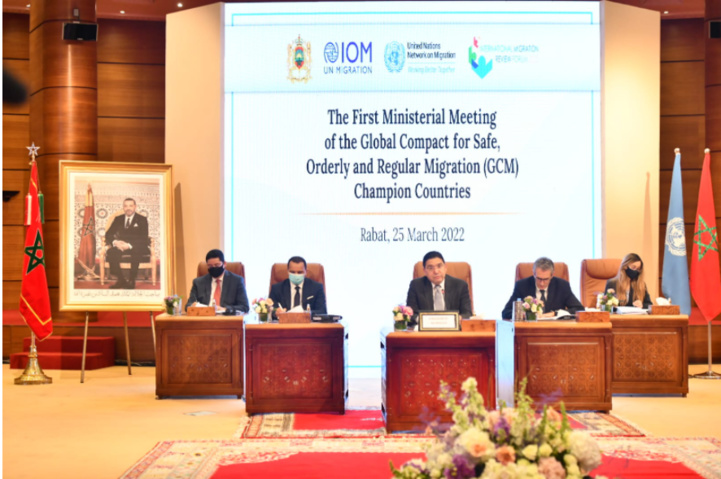 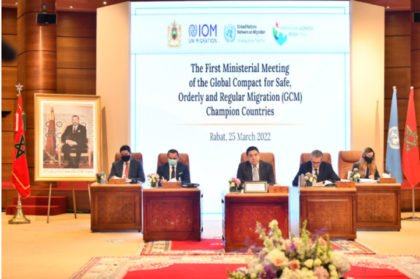 Morocco, by hosting in Rabat Friday the 1st Ministerial Meeting of the Champion Countries for the implementation of the Marrakech Global Compact on Migration, has confirmed its leadership in this area in Africa, thanks to the vision of King Mohammed VI, and called on the African Union to appoint a Special Envoy on Migration.
The conference, held by videoconference, was attended by some 17 ministers and representatives of world organizations, who discussed ways of implementing the Marrakech Pact, adopted in December 2018.

The conference highlighted by the adoption of a Declaration that praised the role of King Mohammed VI as the African leader on migration and reiterated the full support to the Global Compact on Migration (Marrakech Pact).

“We highly commend His Majesty King Mohammed VI’s role as African Leader on the issue of Migration and His strong commitment through the African Agenda on Migration, a roadmap with a clear vision for the continent and the creation of the African Migration Observatory, hosted in Rabat,” the participants said in the Declaration.

“We have gathered to reiterate our full support to the GCM, and commitment to keep working together towards a successful and robust implementation of the Global Compact,” they stressed, saying they were convinced that “international cooperation and the sharing of best practices in the field of international migration in all its dimensions should be the norm, rather than the exception.”

Adopted at the Intergovernmental Conference in Marrakech on December 2018, the Global Compact for Safe, Orderly, and Regular Migration (GCM) represents a major contribution of multilateralism and a collective commitment to improving cooperation to address the challenges and harness the opportunities of international migration and human mobility, through a comprehensive cooperative framework anchored in its vision and guiding principles.

“Amid emerging transitions and in the context of the Covid-19 pandemic, the vision of the GCM must be promoted in order to facilitate and recognize the benefits of safe, orderly and regular migration for everyone,” they insisted.

They recalled that the Champions’ initiative is an open group of States of origin, transit, destination and return committed to the effective implementation of the GCM, in the pursuit of achieving the Sustainable Development Goals and called on other States to join this collective initiative to broaden the platform of Champions representing the full range of migration realities reflected in the GCM.

They also commended the continuous support of the United Nations Network on Migration in the form of guidance and practical tools to accelerate GCM implementation, and its efforts to facilitate collective learning, promote the cross-fertilization of ideas, disseminate information, and the exchange of good practices.

The Rabat Declaration welcomed the report of the Secretary-General on the implementation of the GCM that shows how governments can put in place laws, policies and practices consistent with the commitments and guiding principles of the Global Compact and how they can lead by example, and fulfil the promise of the Global Compact, in accordance with its vision and guiding principles.

The participants acknowledged with appreciation the organization of multiple successful GCM regional reviews and welcomed their recommendations and outcomes, as “we look ahead towards the first International Migration Review Forum (IMRF), which will take place in New York, next May 17 – 20 May, with an interactive multi-stakeholder hearing on 16 May”.

In his address before the conference, Foreign Minister Nasser Bourita demonstrated, with supporting evidence, that Morocco is a genuine champion of migration and reiterated the wish to see “the post of Special Envoy of the African Union for Migration materialize; replicate the experience of the Observatory in other continents; or even, consider the creation in the academic and university institutions of the champion countries, of a network of research centers on migration which would work with the International Organization for Migration (IOM)”.

Bourita insisted on the need to promote inclusive societies, encourage regular migration, reduce the vulnerabilities of migrants, while promoting exchanges, cooperation and partnerships, as well as greater interaction between the Pact of Marrakech and the 2030 Agenda.

The Moroccan official deplored that the pandemic has increased the precariousness of migrants, discrimination against them and their vulnerability to trafficking and dangerous smuggling by human trafficking networks and other merchants of human misery.

The Minister also expressed refusal to sacrifice the development-migration nexus on the altar of all-security, insisting above all on “the firm determination never to instrumentalize, militarize or subcontract migration”. “Morocco rejects the exploitation of migration through shocks,” he said.