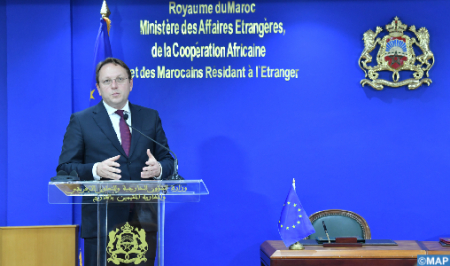 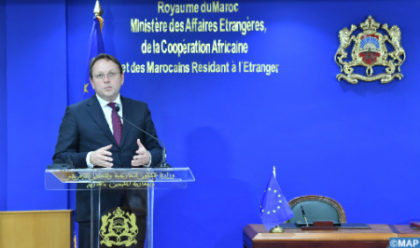 European Union Commissioner for Neighborhood & Enlargement Olivér Várhelyi has welcomed the “serious and credible” efforts made by Morocco for a lasting and peaceful resolution of the Sahara regional conflict.

“We welcome the positive, serious and credible efforts made by Morocco” for the resolution of the Sahara issue”, said Mr. Várhelyi at a joint press conference held Thursday in Rabat with Moroccan Foreign minister Nasser Bourita.

The European Union supports the efforts of the UN Secretary General, Antonio Guterres, added the European Commissioner, stressing the need to advance the UN-led political process to achieve a “just, realistic, pragmatic, lasting and mutually acceptable political solution” to the Sahara conflict.

“We encourage ALL parties to continue on this path, in a spirit of realism and compromise” and in accordance with the UN resolutions adopted by the UN Security Council on the Sahara, underlined Commissioner Várhelyi

The European Commissioner also commended the “leading role” of King Mohammed VI in the implementation of a large-scale program of national reforms.

“We commend the leading role of HM King Mohammed VI in the implementation of an ambitious national reform program which is fully in line with our economic and investment plan,” he said.

The European official highlighted the depth of the Morocco-EU partnership which concerns “a range of priorities”, including the development of the African continent, security, the fight against terrorism, but also all the major global issues “which must be faced together”.

He added that during his talks with Moroccan officials, the two sides reaffirmed “the shared interest” to “ensure regional prosperity, stability and security”.

The EU Commission also expressed gratefulness to Morocco for its persistent endeavors in the area of irregular migration, underlining that the EU is ready to contribute on its part to facilitate this endeavor because, he said, “we are both convinced that irregular migration is a source of instability and vulnerability for the region.”

After their talks and joint press conference, Várhelyi and Bourita inked the document launching “LINK UP AFRICA”, a landmark project in EU-Morocco partnership.

This project is based on the priority given by Morocco and the EU to the development of cooperation with Africa by relying on a triangular Morocco-EU cooperation approach for the benefit of African States.

North Africa Post's news desk is composed of journalists and editors, who are constantly working to provide new and accurate stories to NAP readers.
NEWER POSTSenegal: Senior official dismissed after comments on the conditions of women
OLDER POSTMorocco: Chair at Mohammed V University to promote research on Moroccan Hebrew law