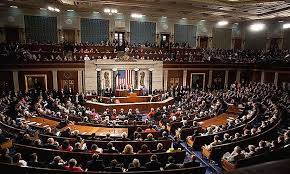 Prominent U.S. congressmen have set up a bipartisan caucus to strengthen and expand the U.S. brokered Abraham accords which helped to normalize relations between Israel, Morocco, Bahrain, the United Arab Emirates and Sudan.

The new caucus was announced lately in a joint statement by four senators and four members of the House of Representatives. In the Senate, the caucus is chaired by James Lankford (R-OK), Jacky Rosen (D-NV), Joni Ernst (R-IA) and Cory Booker (D-NJ).

The other four co-founders of the caucus in the House are Republicans Cathy McMorris Rogers and Ann Wagner was well as Democrats David Trone and Brad Schneider.

The caucus members pledge to encourage the expansion of the Abraham Accords, a key deal to achieving lasting peace in the Middle East between Israel and its neighbors, including through a negotiated solution to the Israeli-Palestinian conflict that ensures mutual recognition and guarantees that Israelis and Palestinians live side by side in freedom, security, and prosperity.

Their goal is also to foster religious freedom and tolerance throughout the Middle East through interfaith and intercultural dialogue between Israel and Abraham Accords countries.

They pledge to support U.S. investments in the Abraham Accords countries in the sectors of energy, security, water infrastructure, biomedicine, cybersecurity, technology and healthcare.

The Abraham accords peace deals, sealed in 2020, have opened up huge economic opportunities in the Middle East and paved the way for advancing peace in the region, especially between Palestinians and Israelis.