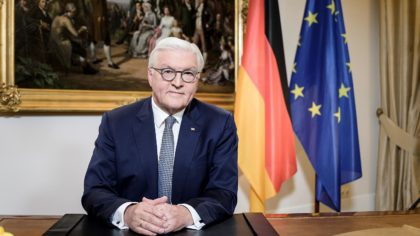 In a new move to mend ties with Morocco, Germany’s president has sent to King Mohammed VI an invitation for an official visit to Berlin in order to establish a “new partnership.”

In a message on occasion of the new year, German President Frank-Walter Stein welcomed the largescale reforms spurred by King Mohammed VI and underscored the autonomy initiative as a basis for a political solution to the Sahara conflict.

The message reiterates Germany’s position in support of the autonomy initiative and Morocco’s role in promoting regional peace and stability including in Libya.

“I hold in high esteem your innovative approaches in the fight against climate change and in terms of energy transition”, said the German President, stressing that “thanks to the dynamic development of your country, Morocco has become an important investment location for German companies in Africa”.

The German president highlighted Morocco’s “commitment to the fight against international terrorism, which is essential for my country (Germany) and its security.”

“We also consider the Moroccan model in terms of imams training as a promising element that can curb extremism”, underlined the German President.

“My country and I are very grateful to you for your active commitment to the peace process in Libya,” said the German President in his message to King Mohammed VI.

The Moroccan government welcomed this Thursday at the cabinet’s weekly meeting “with great satisfaction” the positive content of the German President’s message to King Mohammed VI.

Morocco recalled its ambassador to Berlin in May last year and suspended all cooperation ties and contacts with the German embassy in Rabat and German organizations over what Rabat had described as German antagonism against Morocco’s territorial integrity.