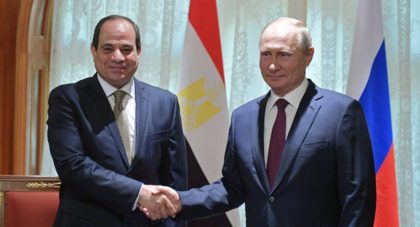 Russian President Vladimir Putin and his Egyptian counterpart have agreed to cooperate on the Libyan crisis after the oil-rich country missed the scheduled key Christmas elections.
Both leaders held a telephone conversation Saturday, Libyan Observer reports, citing the Egyptian presidency.
The discussion according to the office of the Egyptian leader reflected a consensus on the importance of intensifying efforts and mutual coordination between Egypt and Russia to settle the Libyan crisis and achieve the desired aspirations of the Libyan people for a better future.
Both equally discussed the issue of combating and disbanding armed militias and terrorist organizations and putting an end to “illegal” foreign interference in Libya.
UN-backed presidential elections expected to take place on Dec. 24 to endow with the country with a central government for a decade, did not take place over several challenged faced by electoral commission.
Several countries including the U.S and the Europe called for the withdrawal of foreign fighters in the countries before the elections proceed.
Russia is accused of backing Wagner; a private security company owned by an ally of President Putin, operating in Eastern Libya.
Dozens of candidates including Saif al Islam Gaddafi; son of former and assassinated leader Muammar Gaddafi have been vetted to run the polls.