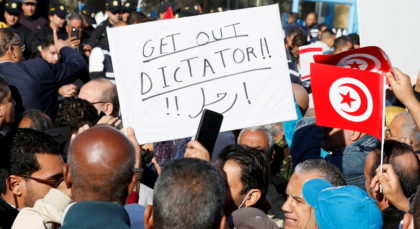 Tunisia has long been hailed as an Arab Spring success story in terms of democratic reform. But on the back of economic hurdles, Tunisia’s freely elected President is burning the ladder that brought him to power tightening his power grab, idling elected institutions and cracking down on dissent.

Human Rights Watch and Amnesty International have rang the alarm bell regarding Tunisia’s slide to authoritarianism amid a surge in free speech prosecutions of people who criticize the President’s coup d’état.

The President has disbanded the Parliament and reshuffled the government while putting off legislative election to next July, triggering the wrath of pro-democracy forces in the country.

“To publicly challenge the president and his seizure of special powers is to risk finding yourself in court,” said Eric Goldstein, acting Middle East and North Africa director at Human Rights Watch.

“Silencing critics is doubly dangerous at a time when the president is busy concentrating so much power in his own hands,” he said.

Criticism of the president risks prosecution as an offense under the military justice code because the president is commander-in-chief of the armed forces under the constitution.

The military justice code punishes with up to three years in prison “any person, military or civilian, who denigrates the flag, defames the army, or incites military personnel to disobey or criticize military leaders.”

Repressive laws, including those criminalizing criticism of state institutions, have remained in force despite the 2014 Tunisian Constitution’s protection of freedom of speech, deplored Human Rights Watch.

In the midst of this crackdown, Tunisia has given its former President Moncef Marzouki a four-year jail sentence for “assaulting” the security of the state.

Marzouki said the ruling was issued by an illegitimate president who overturned the constitution.

Newer PostMorocco’s Dakhla poised to serve as investment gate to Africa – Oxford Business Group says
Older PostPolisario Leader: Self-Proclaimed SADR is NOT a State as It Relies on Algeria for its Survival