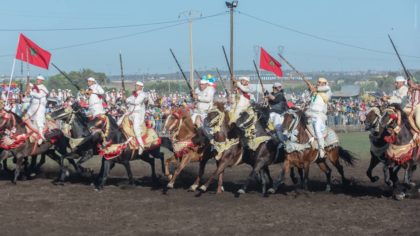 UNESCO integrated, this Wednesday, the Moroccan equestrian art of Tbourida to its intangible cultural heritage, a status allowing to preserve this ancient equestrian practice that is very popular in Morocco.

Tbourida is part of the Moroccan national heritage and constitutes a major component of the practices related to the horse. This equestrian art, deeply rooted in the Moroccan culture, is associated with both national and regional festivities.

Tbourida also crystallizes multiple dimensions of intangible cultural heritage, including rituals, skills and know-how related to the traditional dress, crafts, in addition to the oral legacy that is inseparable from this equestrian practice and the horse.

Tbourida is a Moroccan equestrian performance dating back to the sixteenth century. It simulates a succession of military parades, reconstructed according to ancestral Arab-Amazigh conventions and rituals. Each tbourida is performed by a troupe made up of an odd number of riders and horses (between 15 and 25), UNESCO said in a press release, describing in detail the performance of this art.

Morocco’s Tbourida application file was officially submitted in 2019. This file was developed by the Ministry of Culture and Communication, in partnership with the Royal Society for the Encouragement of the Horse (SOREC) and the Royal Moroccan Federation of Equestrian Sports.