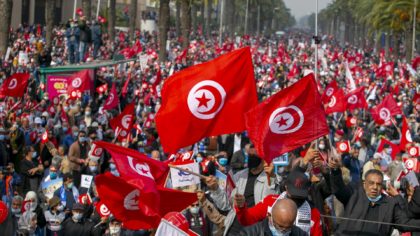 Tunisia is facing the real risk of defaulting on its external debt which has reached 100% of GDP compared to 35% in 2010.

The credit crisis adds to Tunisia’s woes of political and social instability as the country struggles to redress an economy hit by Covid-19 and a drop in tourist arrivals on the back of domestic turmoil.

The authoritarian measures taken by President Kais Saied have also complicated Tunisia’s outlook and raised its default risk as the country has stumbled to get a much needed IMF deal.

President Saied has gone as far as shrugging off ratings by credit rating agencies indicating that tough times ahead awaits the Tunisian economy where painful reforms are needed to balance the budget.

Debt service accounts for 28% of Tunisia’s budget and the country has so far 3.16 billion dollars in overdue debt payment.

Some 60% of Tunisia’s debt is in dollars and the Euro and 58% of this debt is held by multilateral donors such as the IMF, the World Bank or the African Development bank.

International lenders have on multiple occasions recommended Tunisia to downsize its disproportionate public payroll. Out of a population of 12 million, Tunisia has over 700,000 civil servants.

Tunisia has more public sector employees compared to 568,000 in Morocco which has a population three times bigger.

However, downsizing the civil service payroll also risks worsening the country’s unemployment rate which stands at 17%, without counting thousands of workers in the informal sector left without social protection.