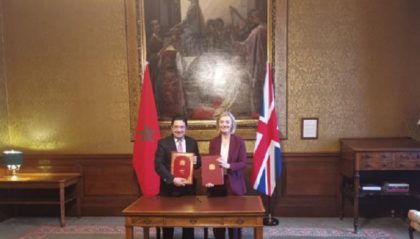 The UK and Morocco took concrete measure to foster their economic and security cooperation ties during their third strategic dialogue, a milestone in ties that have been established 800 years ago.

At the end of the strategic dialogue in London co-chaired by foreign ministers of the two countries Nasser Bourita and his UK peer Liz Trusss, a joint statement outlined the priority areas for cooperation between the two countries indicating that London sees in Rabat a strategic non-EU partner.

The joint declaration announced the creation of the bilateral council and the Association committee as well as a committee in charge of promoting investment and facilitating trade.

The UK lauded Morocco’s counter-terrorism efforts and expressed a convergence of views regarding support to global efforts to eradicate terrorism, notably in the Sahel region.

Special attention was given to cyber security cooperation as the two parties agreed to participate constructively in efforts to develop a new international convention on cybercrime to ensure that it is inclusive, results-oriented and protects human rights.

In this respect, the joint declaration announced the upcoming opening of a new Center of Excellence in Cyber Security for Africa in Morocco, building on close cooperation between British and Moroccan companies and universities.

On Libya, the UK welcomed Morocco’s steady efforts to facilitate conditions propitious for bridging the gap between the Libyan rivals in favor of a political solution to safeguard Libya’s unity and territorial integrity.

The two ministers welcomed the ceasefire agreement reached on October 23, 2020, including the withdrawal of foreign forces and mercenaries from Libya, as well as the action plan approved by the joint military Council 5+5.

On the Sahara issue, the UK welcomed UN Security Council resolution 2602 which urged a political and mutually acceptable solution based on compromise and reaffirmed the need for the participation of all parties to the political process.