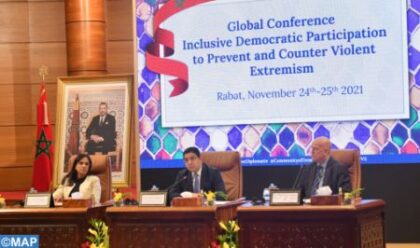 Morocco has underlined the paramount importance of inclusive democratic participation as a tool in the fight and prevention against violent extremism and announced that its first National Action Plan on Women, Peace and Security, in application of Security Council resolution 1325, is being finalized.

“Inclusive democratic participation today represents not only a tool for the promotion and improvement of democracy, but also a means of combating and preventing violent extremism”, said Moroccan Foreign Minister Nasser Bourita Wednesday.

In a speech at the opening of a global conference on inclusive democratic participation to prevent and counter violent extremism, held in Rabat in hybrid mode, the minister stressed the need to join efforts to strengthen cohesion and help local stakeholders consolidate their resilience in the face of conflicts and divisions. It is not enough to fight violent extremism. Violent extremism must also be prevented, he insisted.

This prevention requires the implementation of several tools, including the empowerment of young people and the promotion of education, the integration of women in initiatives to fight violent extremism, and the contribution of the media and social media in preventing violent extremism, he explained.

After highlighting the threat that violent extremism poses to young people, “privileged targets of recruitment strategies”, Bourita warned that security responses were insufficient, as they do not tackle the many factors that fuel violent extremism and lead this category to rally to violent extremist groups.

Faced with such threats, the minister underlined the importance of quality “soft power”, relevant, inclusive, and equitable education, as well as the imperative to integrate a gender perspective into prevention initiatives.

Bourita also stressed, in this regard, the need of the full participation of women in the process of decision-making in matters of security as well as the essential role of the media and social media in prevention against violent extremism, especially among young people.

Surveying the efforts made by the Kingdom to fight violent extremism, Bourita said Morocco has put in place an ambitious policy to combat this scourge, contributing, in the medium and long terms, to an inclusive democratic participation.

Morocco has made of the consolidation of democracy, and more particularly inclusive democratic participation, the cornerstone of building a modern and democratic society.

The Kingdom’s deep conviction is that there could be no development without stability and stability without democracy, he said, underlining that the various reforms undertaken within the framework of the Royal Vision on the constitutional, legislative and regulatory levels all converge towards the achievement of an inclusive democratic participation, more particularly of women and young people.

“Our country is in the process of finalizing its first National Action Plan on Women, Peace and Security, in application of Security Council resolution 1325 and on the basis of an inclusive and participatory approach involving all the Ministerial Departments concerned,” the minister announced in his address.

This action plan is intended to be a real transformation tool aimed at channeling efforts to strengthen the resilience of women in the face of emerging threats in an environment that is increasingly complex at the regional and international levels, he explained.

This action plan will serve, according to Mr. Bourita, as a framework for policy convergence in the fields of preventive diplomacy, mediation, peacekeeping, the promotion of a culture of peace and equality and economic participation of women.

The Global Conference on inclusive democratic participation to prevent and counter violent extremism is organized by the Foreign Ministry, in cooperation with the Permanent Secretariat of the Community of Democracies (PSCD), the Rabita Mohammadia of Ulemas, and the National Human Rights Council.