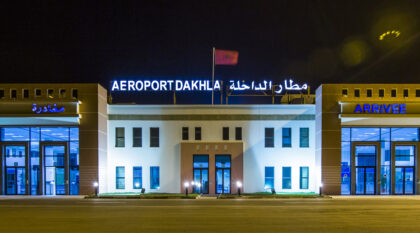 The capacity of Dakhla airport will be increased to one million passengers annually after its expansion from 3,000 m² to 10,000 m² to meet a growing demand for this Saharan hub which has become a popular destination for foreign tourists, diplomats and businessmen.

According to plans unveiled lately by Morocco’s National Airports Authority (ONDA), the airport of this Saharan city has reached its maximum operating capacity. Its expansion will enable it to build additional aircraft parking stands for seven medium-size planes and extend car parking area near cargo terminal.

New hotels and a network of roads will also be built within the development master plan set for the Saharan region, gateway for investment in Africa.

In late December, the construction works of a new terminal for private aviation will be launched.

ONDA has also announced a project to upgrade Hassan 1er airport in Laâyoune.

This project involves the strengthening of movement areas, aeronautical pavements, sides of the runway, as well as the extension of aircraft parking lots.

The projects also provides for widening the traffic lanes leading to the airport and renovating the lighting system using LED technology.

Over the past two years, ONDA has already carried out several development projects for Laâyoune airport, including the construction in 2019 of an official reception building and the renewal this year of equipment and instruments to help improve air navigation and communication.

These projects are part of the ONDA strategy aimed at increasing the reception capacities of regional airports and the generalization of compliance with international standards in terms of air traffic flow, air safety, airport security and services quality.