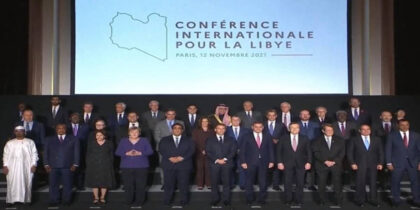 Morocco’s Foreign minister, Nasser Bourita, represented King Mohammed VI in the international conference on Libya held Friday in Paris ahead of the presidential & parliamentary elections scheduled for Dec.24 to restore stability in the country.

In his address before the conference, Nasser Bourita highlighted the Moroccan King’s approach for the resolution of the Libyan crisis and his support for the inter-Libyan dialogue.

This approach, based on the respect of the Libyan will and the banishment of any paternalism, has allowed major advances initiated by the conclusion in December 2015 of the Skhirat Political Agreement.

Morocco hosted a series of inter-Libyan dialogue meetings which laid the foundations for reconciliation between the various Libyan protagonists.

Bourita recalled in this connection that the Bouznika arrangements of October 6, 2020 allowed progress towards the reunification of the seven sovereign positions, that the inter-Libyan parliamentary congress of November 23, 2020 facilitated the meeting, for the first time since 2011, of 123 Libyan parliamentarians from the East and West, and that more recently, the Rabat Commitment of December 2020 converged the views of the Representatives of the House of Representatives and the High Council of State about the holding of the elections on the scheduled date of 24 December 2021.

Bourita called on the participants in the Paris conference to come out with strong and clear messages to Libya and the International Community. He also urged Libya to commit to a better future to preserve the progress made, stressing that the elections can transform the ceasefire into lasting peace and settle the issue of legitimacy.

The minister emphasized, in this context, the need to ensure that the legislative framework of elections in Libya is “consensual” and “inclusive”. These elections will strengthen the sovereignty of Libya and allow the international community to have a single Libyan interlocutor, he insisted.

After clearly expressing the support of the Kingdom of Morocco to the actions of the Government of Abdel Hamid Dbeibah, the Minister recalled that Morocco is ready to support any agreement between Libyans.

“Morocco is ready to support everything that Libyans will agree on, and this, the Libyan brothers know very well,” said Bourita who stressed the need for a transformation of the role of the international community and Libya’s partners.

“Morocco – which has remained a land of dialogue to which the Libyan brothers spontaneously converge – has always regretted that Libya is for some a “diplomatic business” and, for others, “an arena of struggle by proxy,” said Bourita. “The only stand that everyone must take is that of accompanying the united Libya – without heralds and without intrusions – to establish the conditions for a lasting peace, including through demilitarization; the departure of foreign mercenaries and the reintegration of local militia; accompany Libya on the path of consolidating peace and strengthening the institutions of the rule of law; and help Libya to rebuild itself, through its own resources and through investments managed by Libyans themselves”.

Bourita reiterated Morocco’s support to the efforts of the UN Secretary General Antonio Guterrres and his Personal Envoy Ján Kubiš for the consolidation of peace in Libya.

The conference aims to support Libya in its request for the withdrawal of foreign forces and mercenaries,” said the French presidency in a press release, stressing the need to unify Libyan financial institutions, ensure a fair distribution of wealth and counter human trafficking.

World powers, including the U.S. France, Libya, Germany and Italy, are threatening sanctions against anyone who disrupts Libya’s electoral process and political transition.

They insist on the withdrawal of foreign forces from Libya and the holding of the elections in this country as planned to end a decade of violent chaos that has drawn in regional powers and undermined regional stability since the fall of Gaddafi regime in 2011.