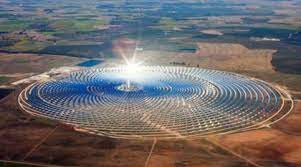 Morocco remains in the top 10 of this year’s Climate Change Performance Index 2022 (CCPI) and among the high-performing countries worldwide.

As the CIPC did not award the top three places in the new rankings, deeming that “no country in the world performs well enough in all index categories to obtain a very high overall score,” Morocco is ranked eighth in the world in the 2022 edition of the climate change performance index, second only to Denmark, Sweden, Norway and the United Kingdom.

Morocco is recognized as an “ambitious leader” in international climate negotiations, says the report.

The latest edition of the Climate Change Performance Index, which has been published on Tuesday, November 9, 2021, ranks the Kingdom in the top of the pack of countries that undertake the most efforts to mitigate global warming, in accordance with the 2015 Paris Agreement (COP21).

Out of the 68 countries studied, representing 92% of global greenhouse gas emissions, Morocco ranks eighth in the world with an overall score of 71.64 points. Morocco is therefore in the top 10, ahead of countries like France, Germany, Spain, China and Japan.

On the continental level, Morocco is by far the best performing country, ahead of Egypt (21st), South Africa (39th) and Algeria (53rd).

As in previous years, Morocco has a high ranking in most categories: Green House Gas Emissions, Energy Use, and Climate Policy. The country’s Renewable Energy trend is rated high, commented the report’s authors, noting that the very low rating in the share of renewables in energy use and low-rated 2030 targets are responsible for an overall medium rating in this category.

Morocco updated its Nationally Determined Contribution in 2021. Its goal is now slightly improved, from 42% to a 45.5% reduction of GHG emissions by 2030, and rates as very high, the report notes.

The CCPI experts see excellent potential for renewable energy production in Morocco, as many large-scale renewable energy projects are currently being realized under the Moroccan Solar Plan. The Plan aims to increase the installed solar power capacity from photovoltaic and from concentrated solar power to a total of 20% of installed capacity by 2030. The Moroccan Integrated Wind Program aims to increase installed wind power capacity to 20% of all installed capacity by 2030.

Aside from the utility-scale projects, the CCPI experts highlight “the excellent potential for renewable energy production in Morocco, indicating that there is also an opportunity for a decentralized energy transition. There are some initial experiences with this: Moroccan officials inaugurated the first fully solar-powered, grid-autonomous village in Africa in October 2019. The country has set the goal of producing 52% of its electricity needs with renewable energy by 2030. Combined with this is Morocco’s goal of reducing energy consumption by 15% by 2030, through enhancing energy efficiency. The experts see progress with investments in the public transport sector and energy efficiency regulations.

Weak points are nevertheless noted in the agricultural and building sectors.
In international climate policy, Morocco is recognized as an ambitious leader in negotiations and shows a commendable commitment to the Paris Agreement.

The Climate Change Performance Index, published annually since 2005, at the initiative of Germanwatch, NewClimate Institute and Climate Action Network International, is an independent monitoring tool to track the climate protection performance of more than 60 countries. The CIPC aims to improve the transparency of international climate policy and makes it possible to compare the efforts and progress of each country in terms of climate protection.